Norway has been on my radar for some time now, but to be honest I wasn’t sure how soon it would happen.  One thing I had repeatedly heard about Norway was that it was expensive, and being able to make the trip work within a slim budget was paramount.  Luckily, my hobbies are generally inexpensive; hiking, backpacking, and adventuring in the mountains have a bit of an initial investment in gear, but beyond that it’s all as far and as long as your legs and arms can take you.  You’re your own chef, entertainment, tour guide, and planner.  Generally, my tactic in expensive places is hire a car, fill up on groceries, then get out to the wilderness!  As per the standard, that’s exactly what I did.  The route, mainly taking place from the Atlantic Road to Preikestolen, in and out of countless fjords, three weeks in a Ford Fiesta would test my minimal living style, but it’s fuel economy would save heaps on petrol! 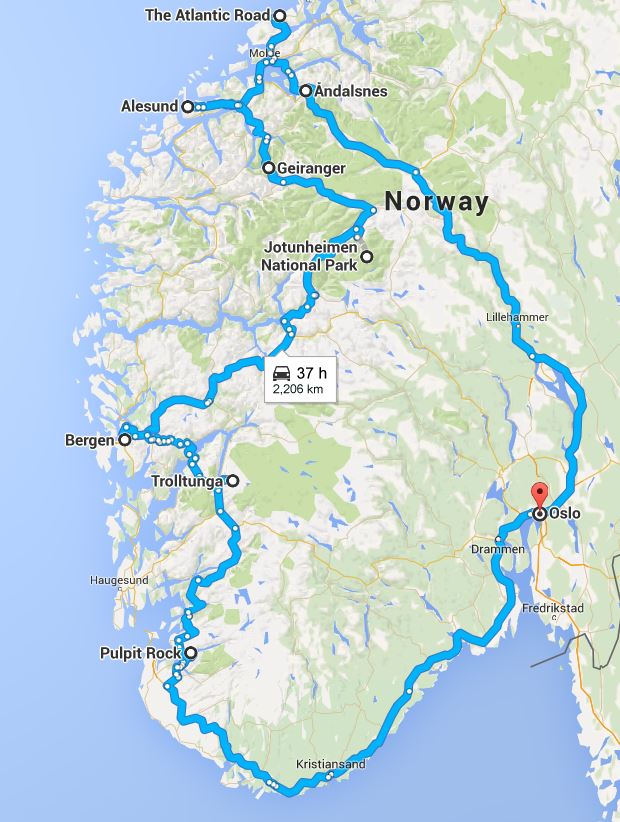 I have a bit of a standard procedure when arriving to a foreign country.  I suppose that I’ve become accustomed to a certain style of travel, and it fits my needs pretty well.  Step one, get thru customs ASAP.  No one likes standing in lines, so find the shortest, look presentable and happy, don’t bring any items you’ll need to declare, and get going.  Pick up checked bags (unfortunately with backcountry and or climbing gear, a checked bag is a necessary evil).  Find a SIM card, usually you can buy these at the airport, but if you don’t see a stand ask around for the closest location.  Having a working local phone has become more important for me these days; from using GPS, researching locations, weather, and being able to do some mobile posting.  On to car hire and then hit the road!  I’ve found that for me and my style, I would rather hire a car and sleep in it/camp along the way.

It was a decent flight over, although I wish I had slept more.  I made it about 2 hours drive from the airport before pulling over to take a nap, but then it was onward to Åndalsnes.  I had read that Norway loves it’s hiking, so night one would be a classic, a sunset view up Rampestreken.  It became quickly apparent that there would be a large volume of elevation gained over the next few weeks.  Starting at sea level and cruising up to the snow line in the mountains at least once a day.  Hiking fitness was about to be tested. 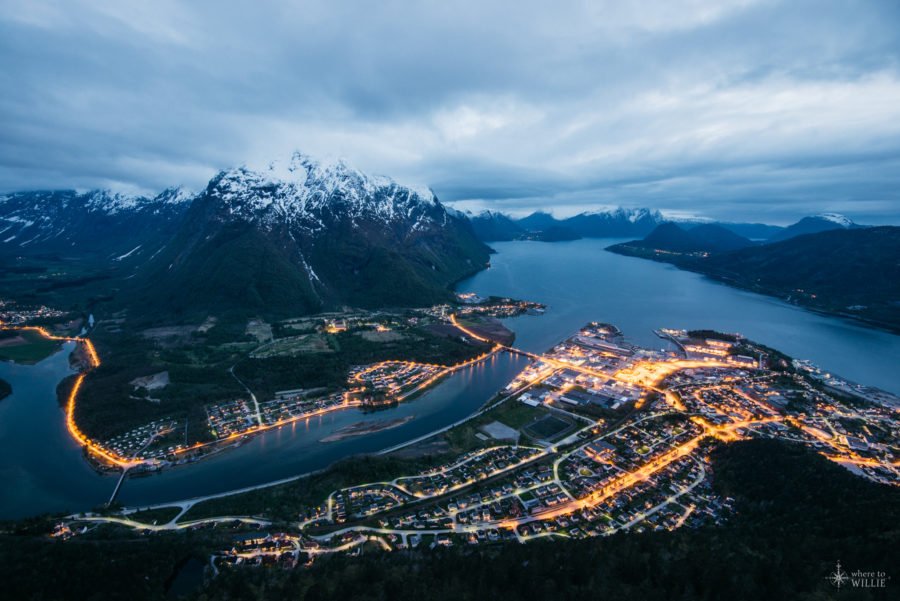 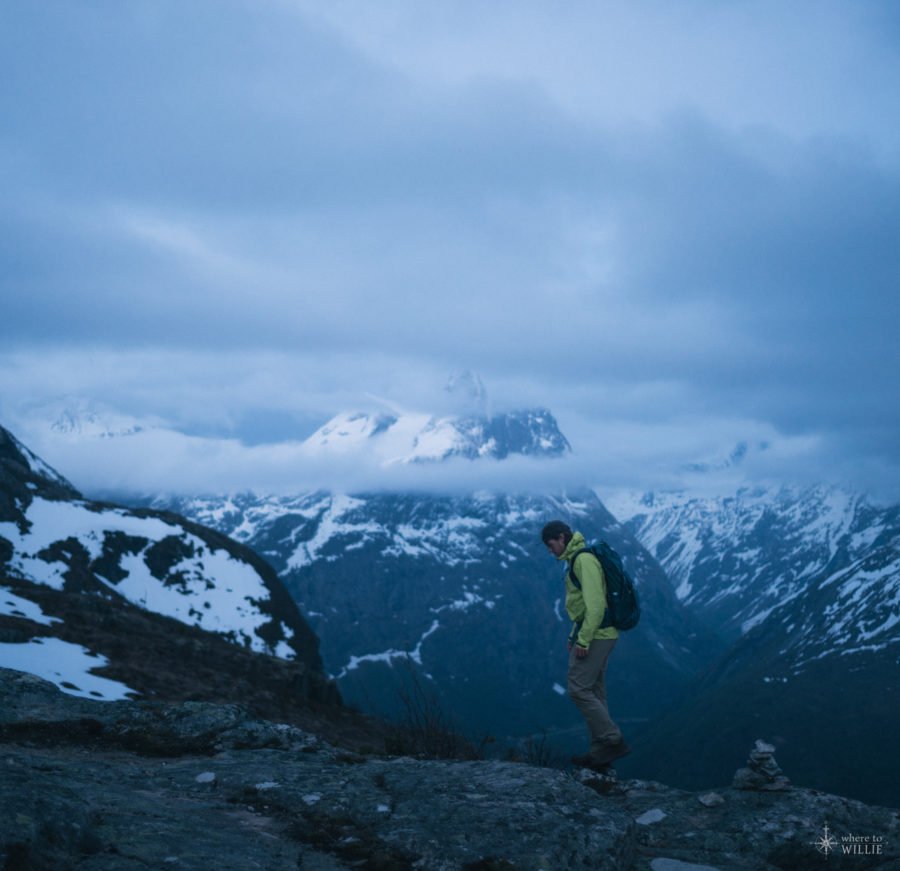 Over the next few days, I watched the storms come and go, traveling from Åndalsnes up to the Bud and the Atlantic Ocean Road, then continuing south to Alesund, Geiranger, and Jotunheimen.  Being this far north in the summer, sunset was late and sunrise was early, so sleep often came in a couple hour increments throughout the day. 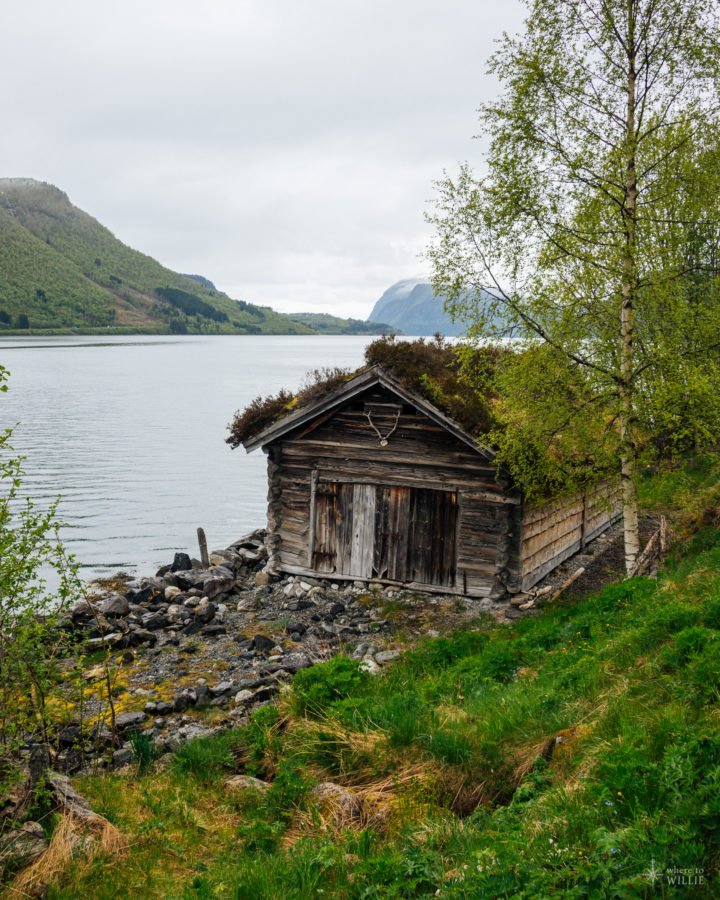 One thing I’ve learned is that you always want to have extra time in your schedule for unexpected stops.  Cruising along the windy two lane roads there was a perfectly still lake down the hill.  After a half hour of trying to find how to get down to the lake, I took a hike around the water’s edge and was granted some wonderful views of the Norwegian countryside. 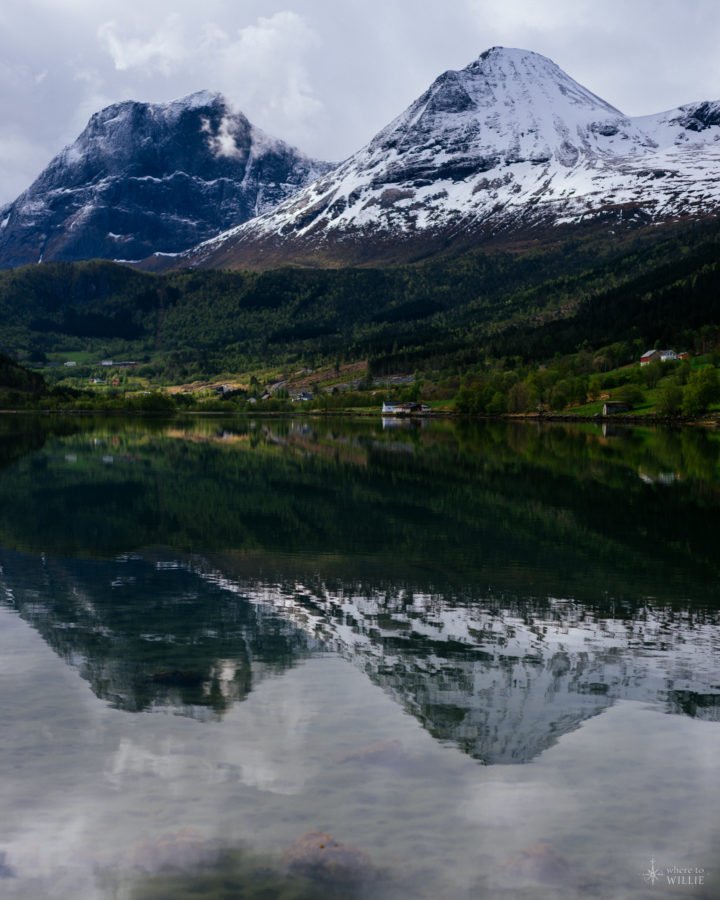 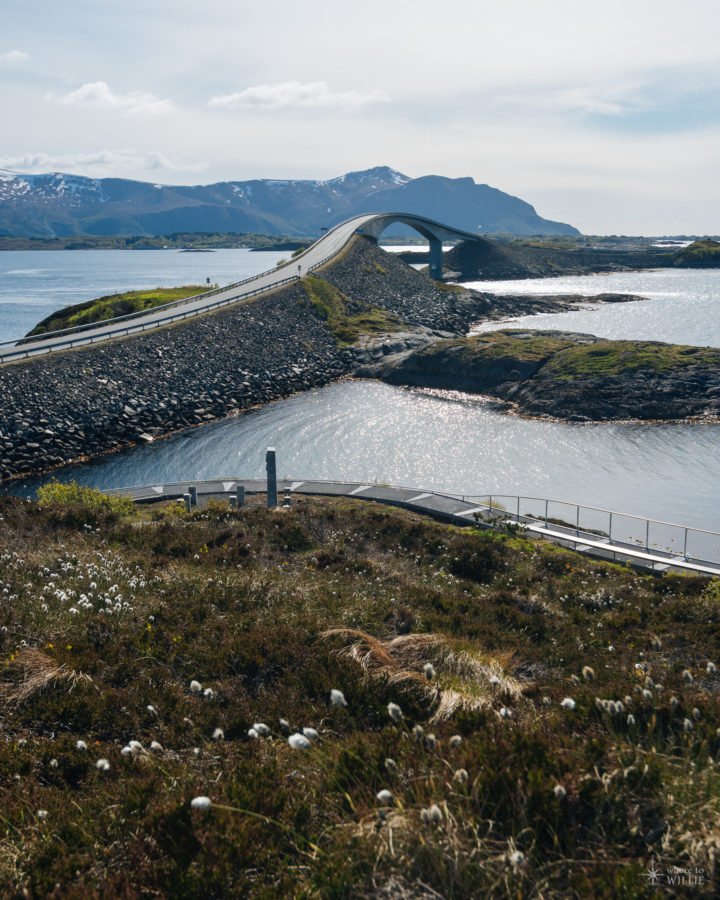 Another lucky find, Trollkirka aka Troll’s Church, was a moderate hike thru an evergreen forest and above the snow line to a cave system that you navigate by head torch, that ends at a cave with a waterfall coming thru the ceiling! 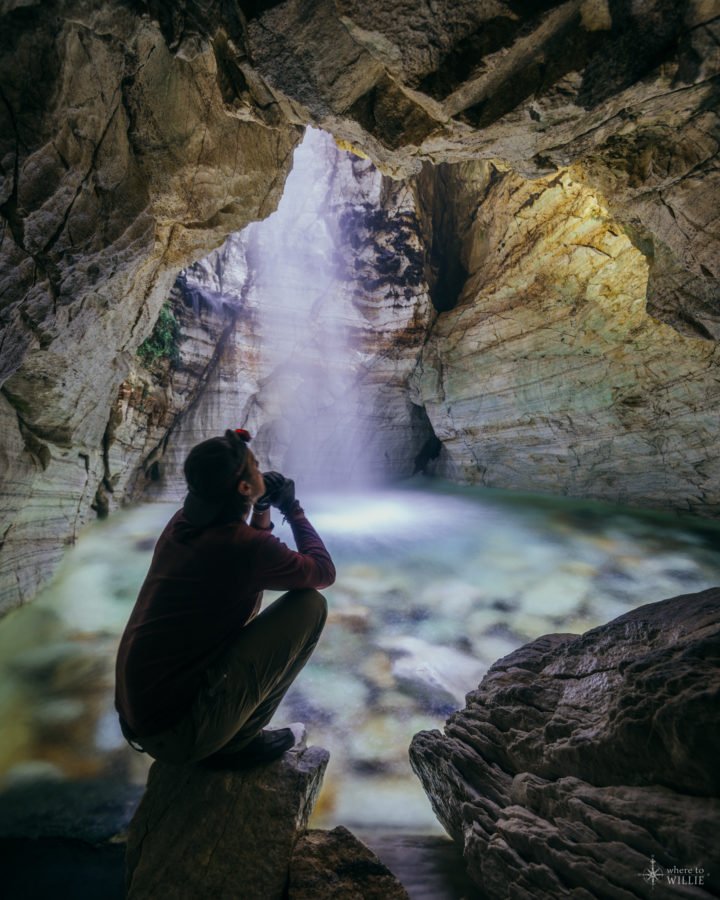 Somehow I ended up with more sheep photos than I’m proud of, but it’s fine, they are cute. 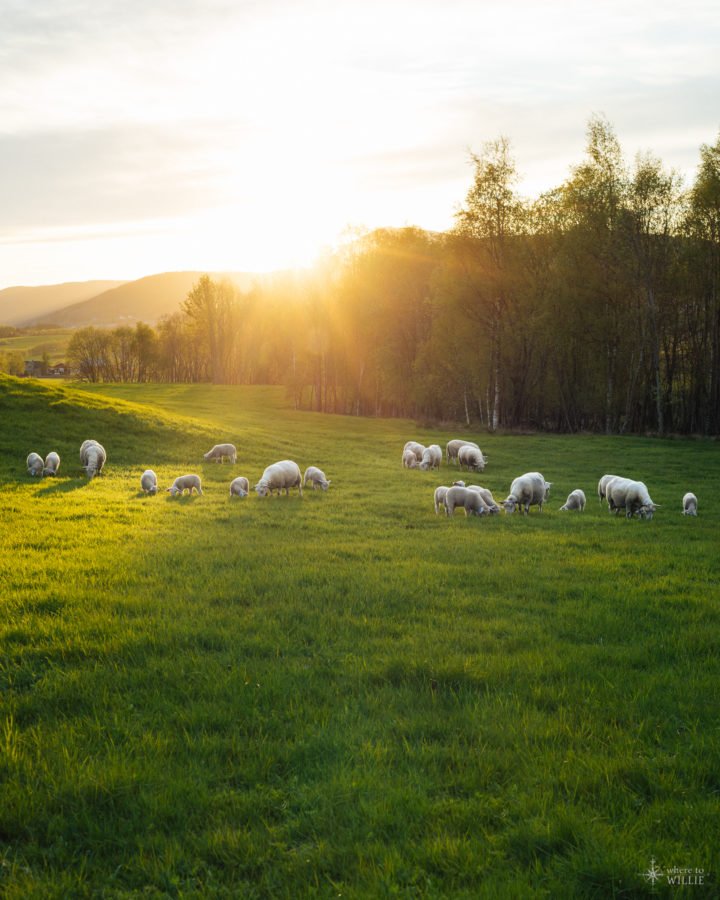 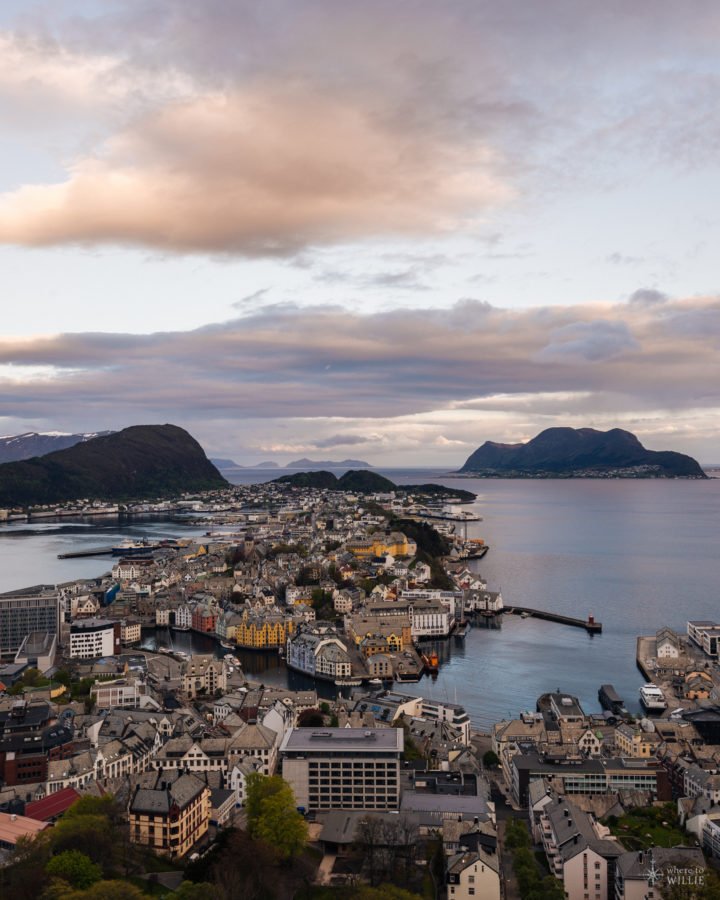 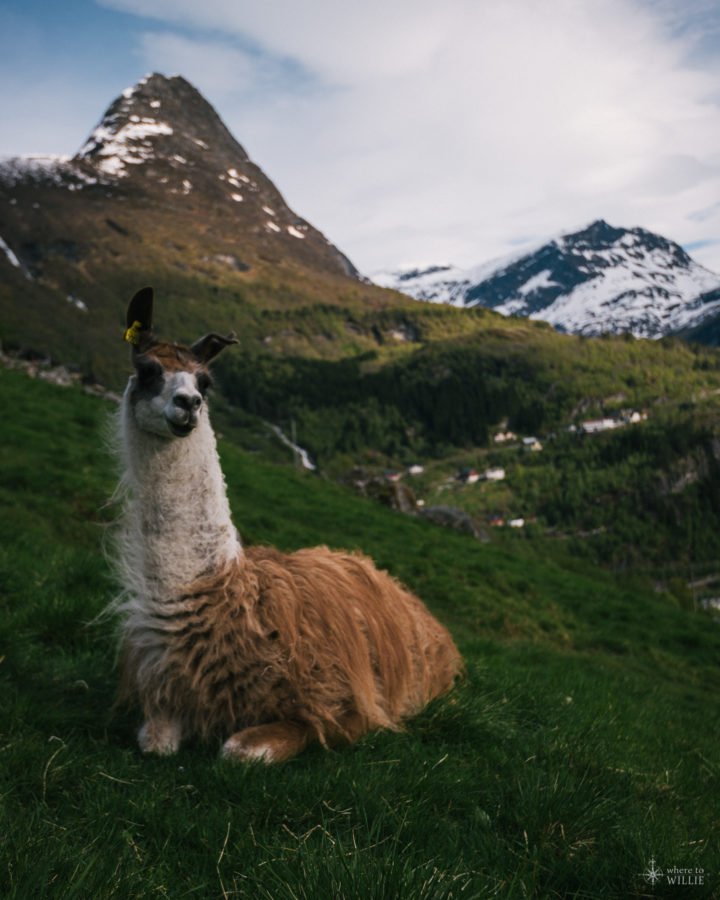 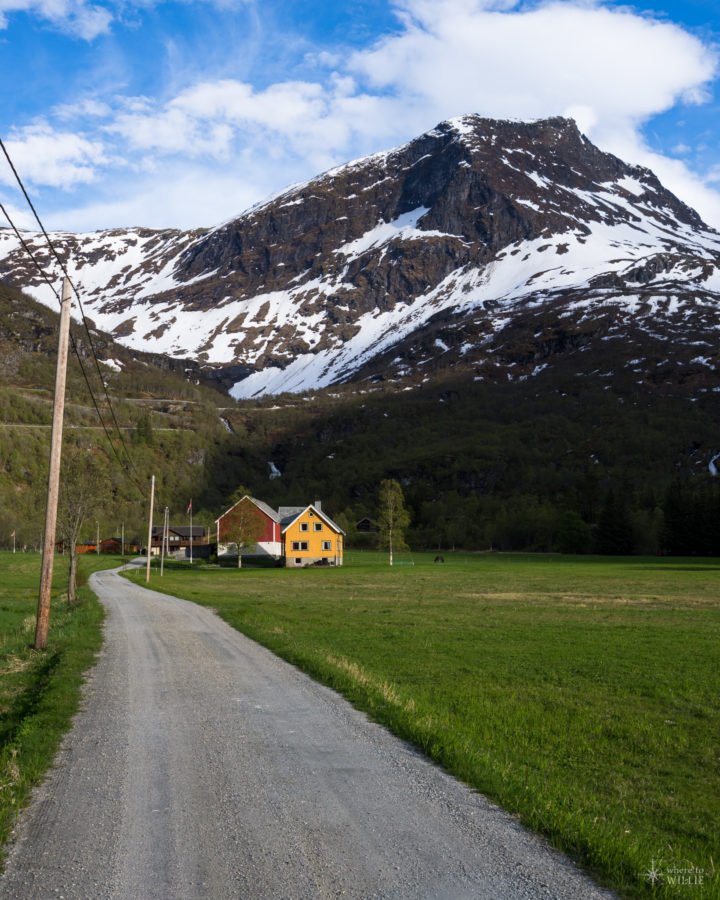 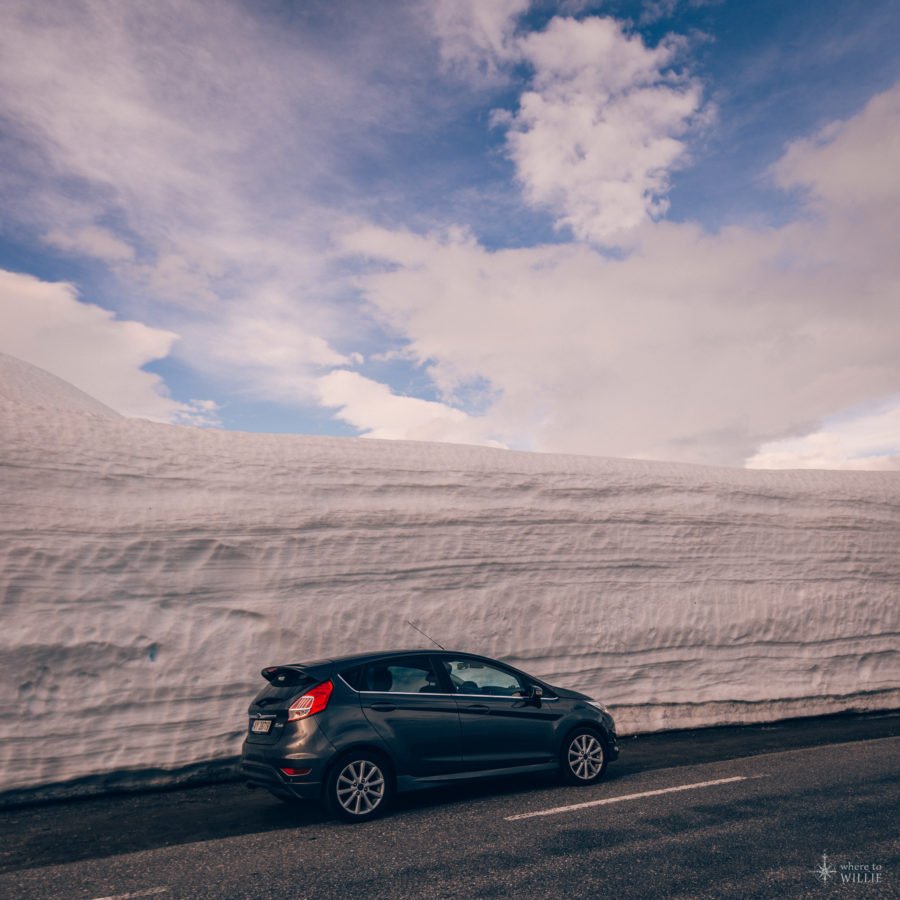 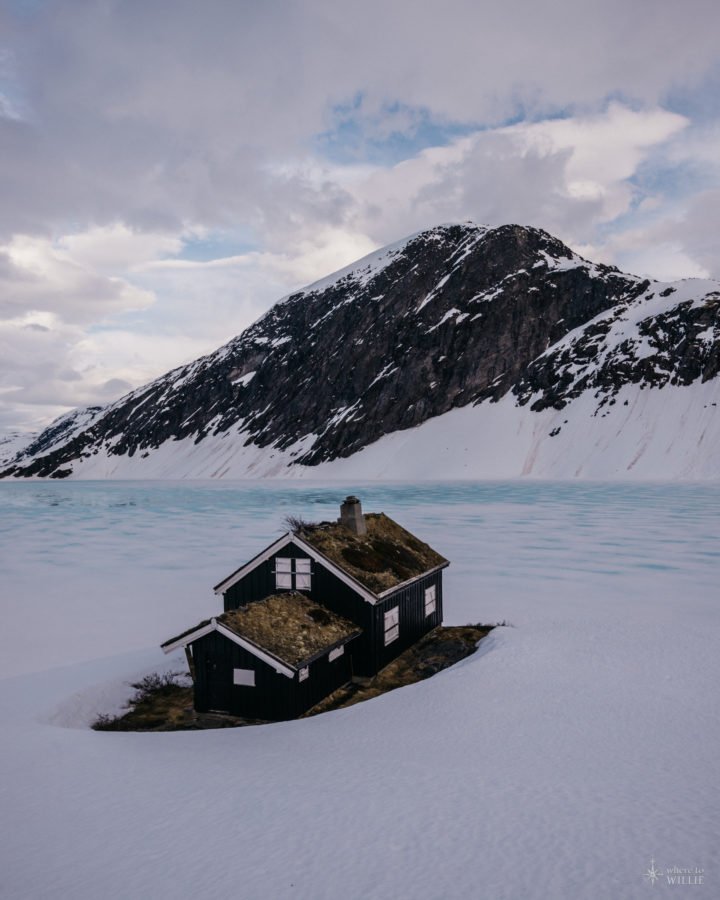 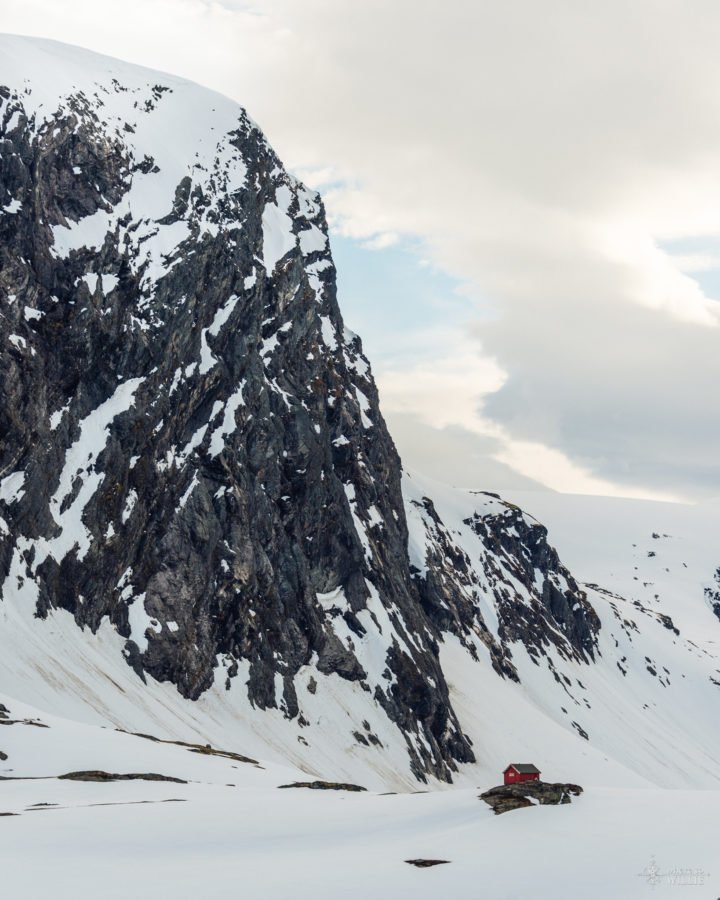 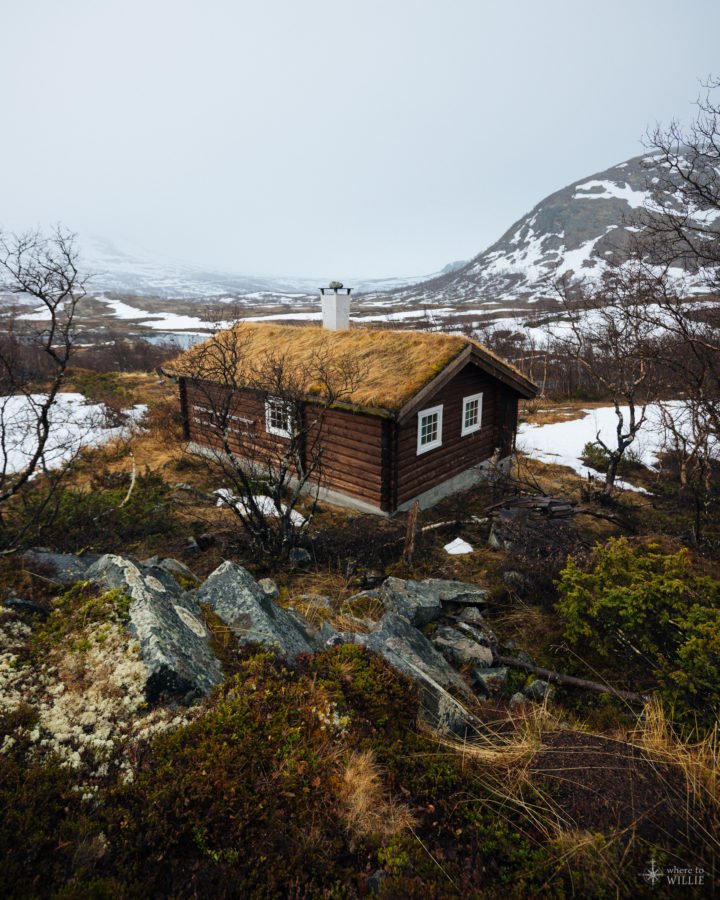 A trip around the fjords wouldn’t be complete without a visit to some of the more iconic sights, like Trolltunga and Preikestolen.  I find that one of the best ways to get the more popular places to yourself is to camp either along the way or at the attraction itself. 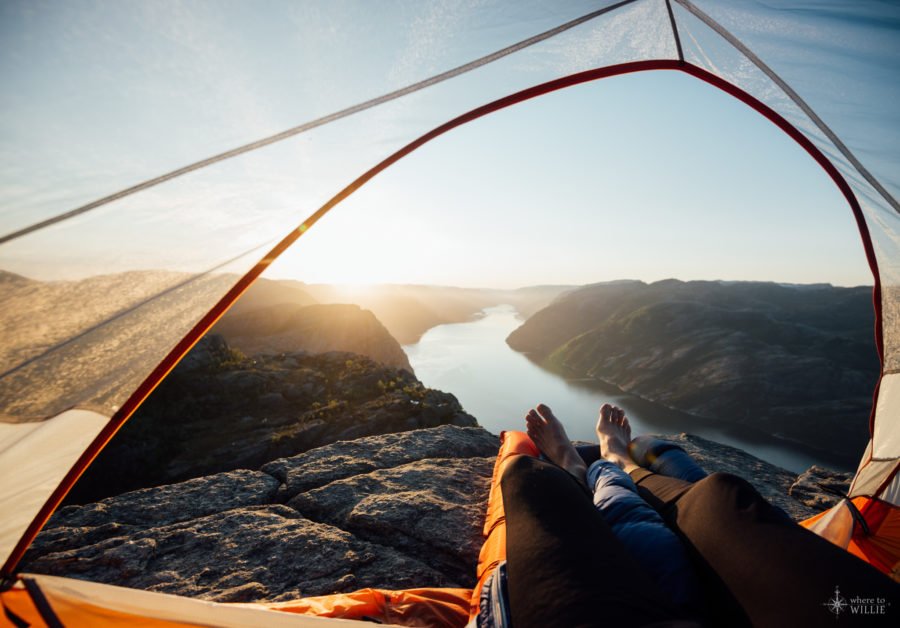 Nothing like getting a little air below your feet, 604 meters above Lysefjorden. 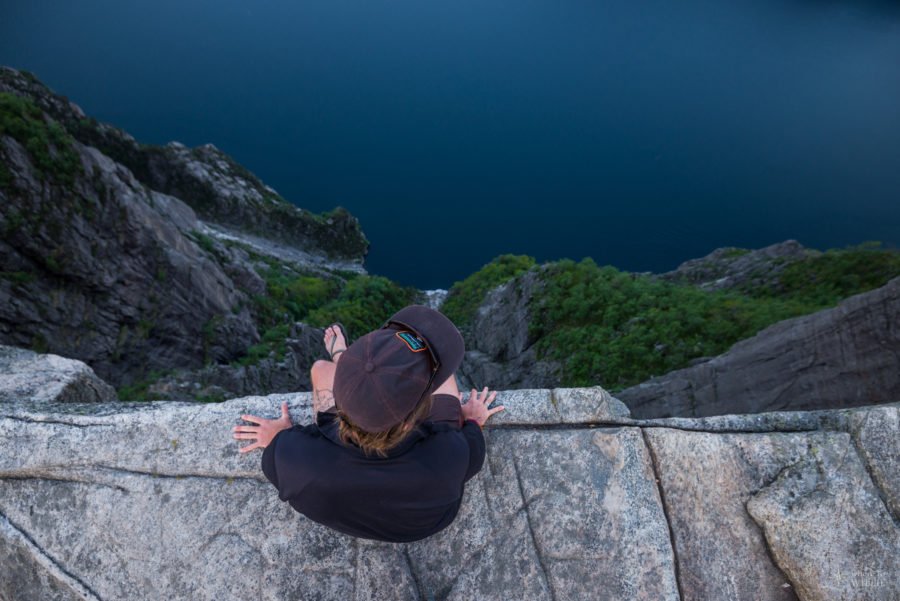 I get a lot of looks for hiking in sandals, but my Earthrunners go with me everywhere.  If it’s not freezing, I’m probably wearing them. 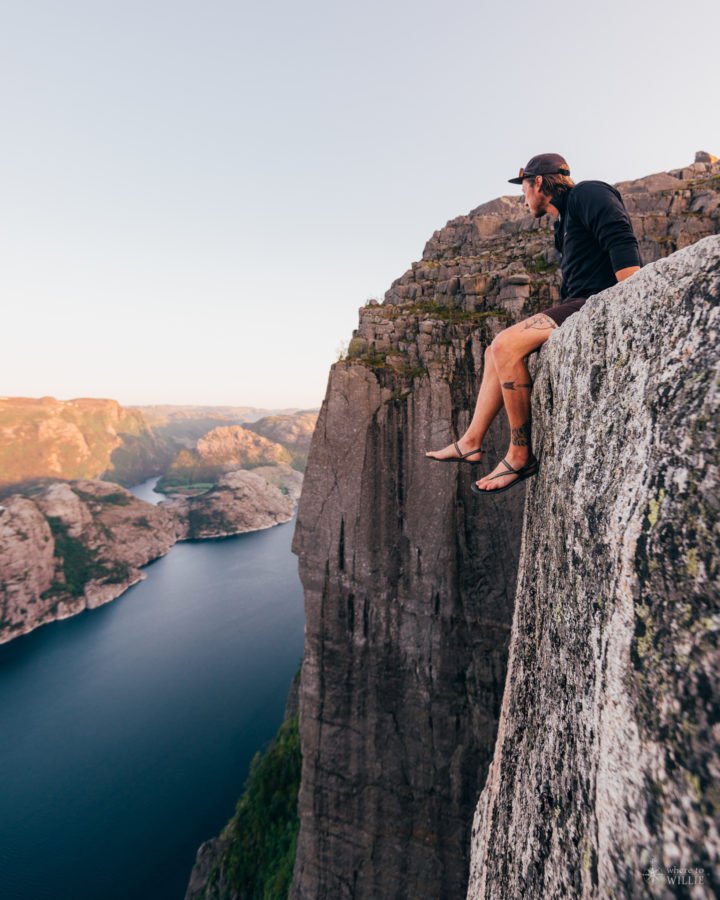 We arrived at Trolltunga late, somewhere around Midnight.  It was a taxing hike, something around 8km of the 11km was thru snow, deep and slushy from the full day of sun.  It’s hard to argue though when you’re sitting out on the tongue. 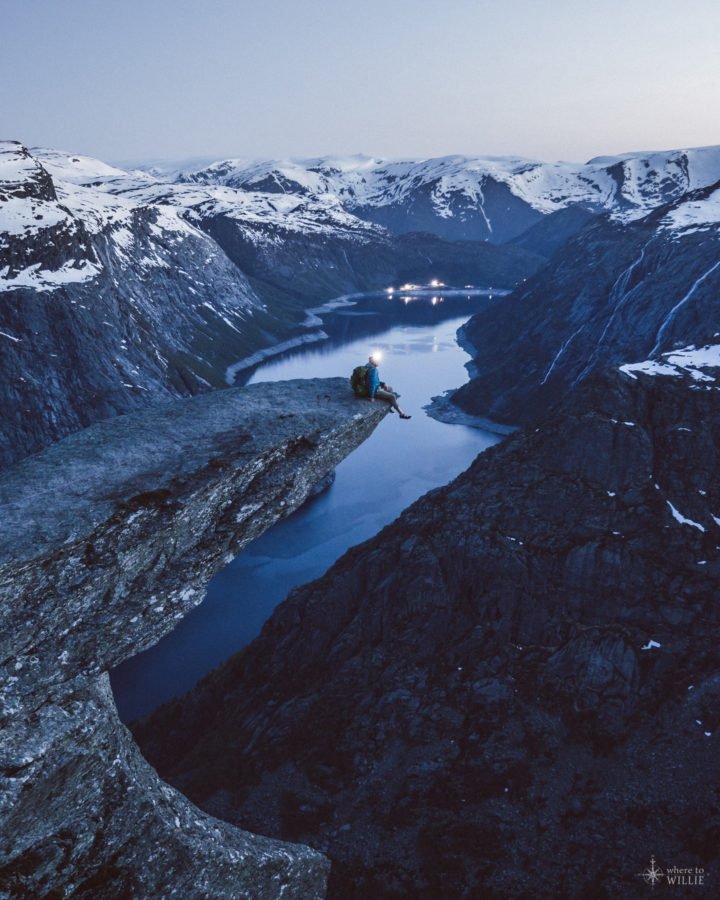 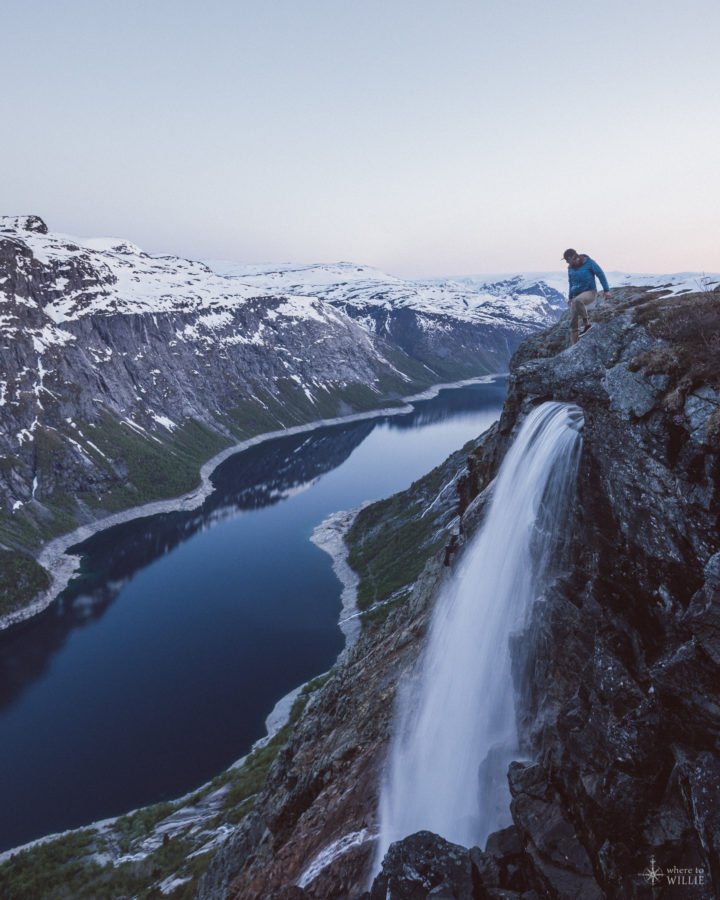 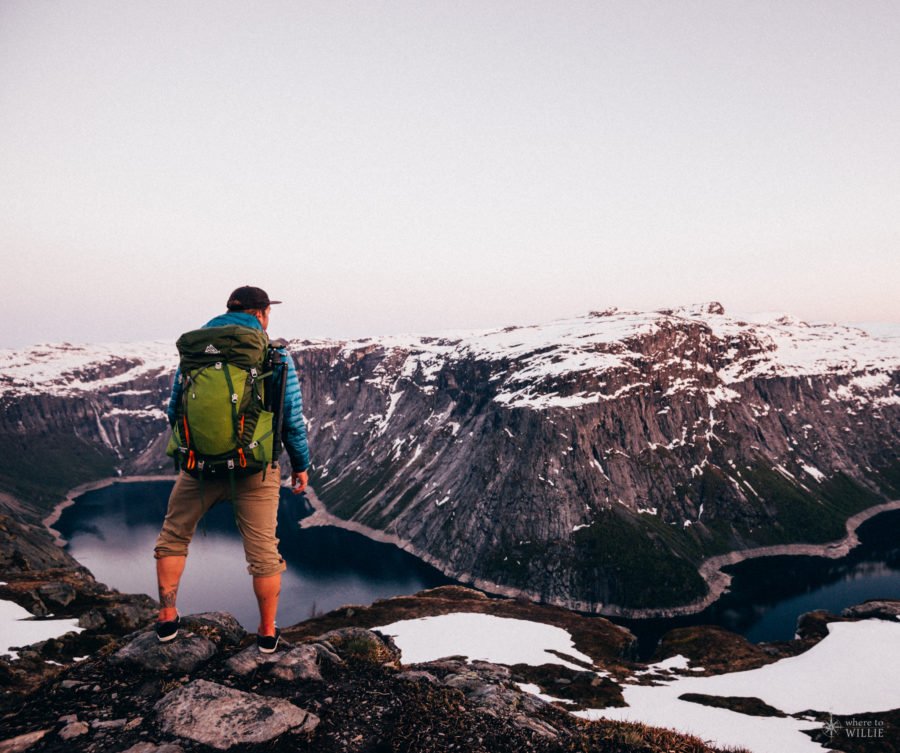 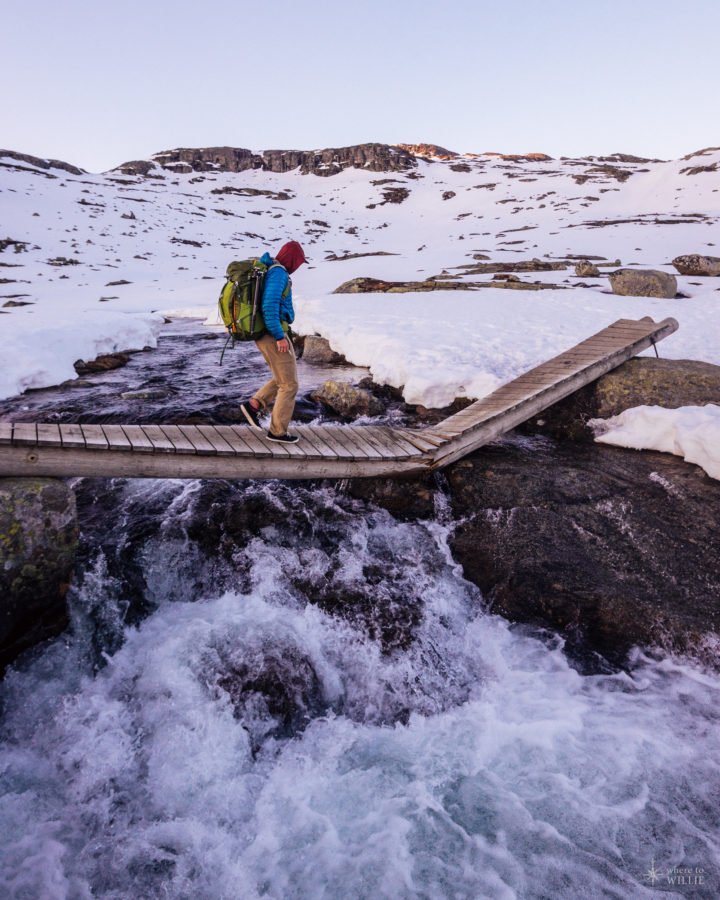 We ended up doing one ‘tour’.  Although I wouldn’t recommend the way we did it specifically, I did manage to convince the ship captain to let me come in and photograph a bit from the captain’s area, so that was cool 🙂 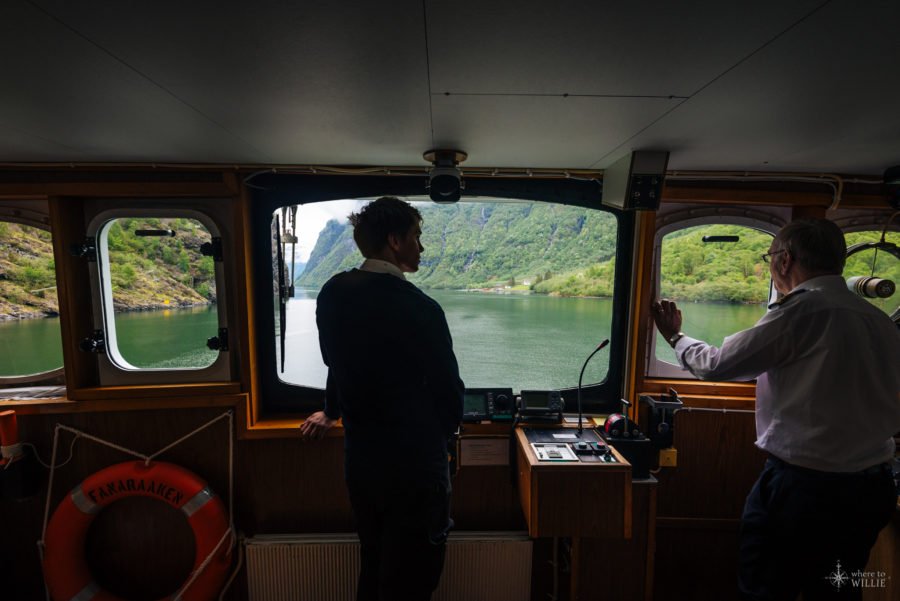 Well that’s about it from southern Norway, Lofoten Islands review is coming up next!