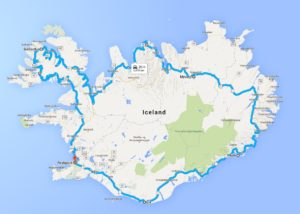 We had no plans, no expectations, nowhere to be for the next seven days.  All we had was a Hightop VW Syncro, an island full of places to explore, and an open mind for finding our way round the island of Iceland.  To be honest, I didn’t know what to expect when we landed in Reykjavik, but James Barkman aka Barky and I stopped in to Snail VW (www.snail.is) to chat with Sigrún about some potential travel options and hear some horror stories of drivers who need to spend more time in a manual car before hiring one to live in!  I’ve heard this more than a few times now, car hire companies who do their best to ensure the renters can drive a manual before letting the vehicle leave, but end up with a blown clutch or worse.  Luckily, being two VW regulars (Barky also lives full time in his ’76 Westfalia) we loaded up the van with our gear set off with high hopes for the adventures to come.

I find that most people either thrive or flounder in ‘no plans’ situations.  It’s easy to get frozen in the ‘what should we do now’ mentality, and with as many options as a place like Iceland has to offer, there isn’t much point in trying to compare one to another, rather we found it best to just hit the road and get started.  We met two friends from California the first day, and decided on a hot springs tour thru the western fjords, with a pit stop along the way at the famous Kirkjufellsfoss waterfall, where we tested Barky’s cold water tolerance with several back flips off the falls. 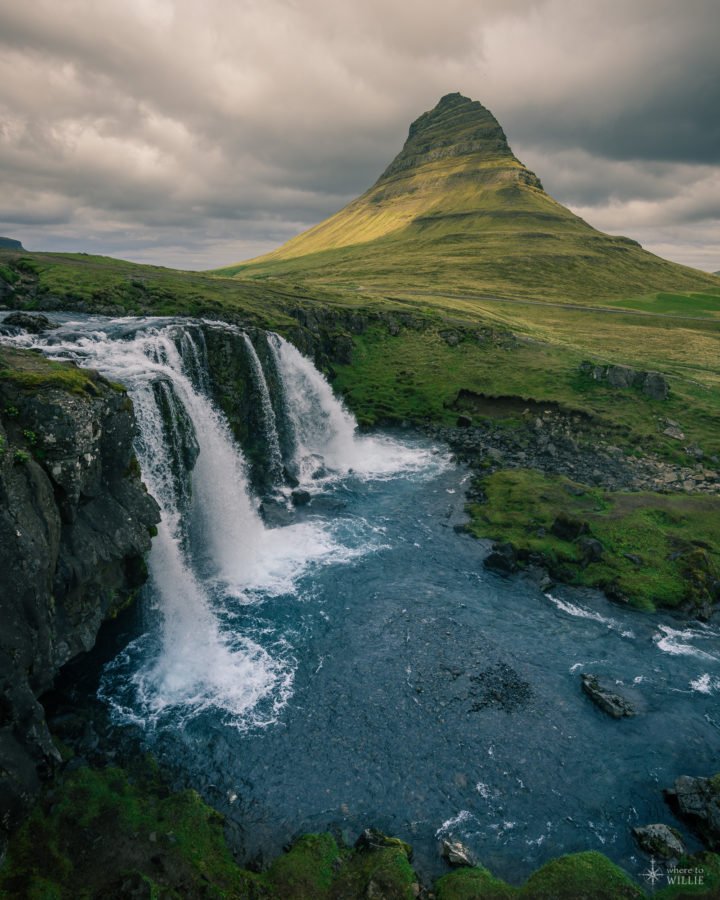 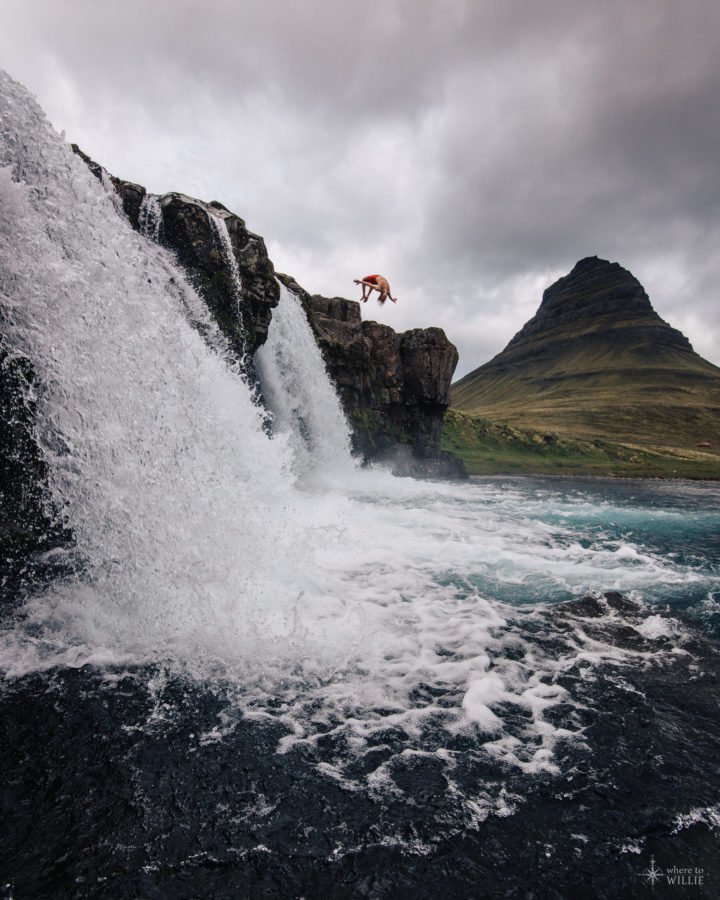 Fortunately, our next two stops in the west fjords were hot springs, and the second can hit 55°C (130°F) so we all warmed up plenty. 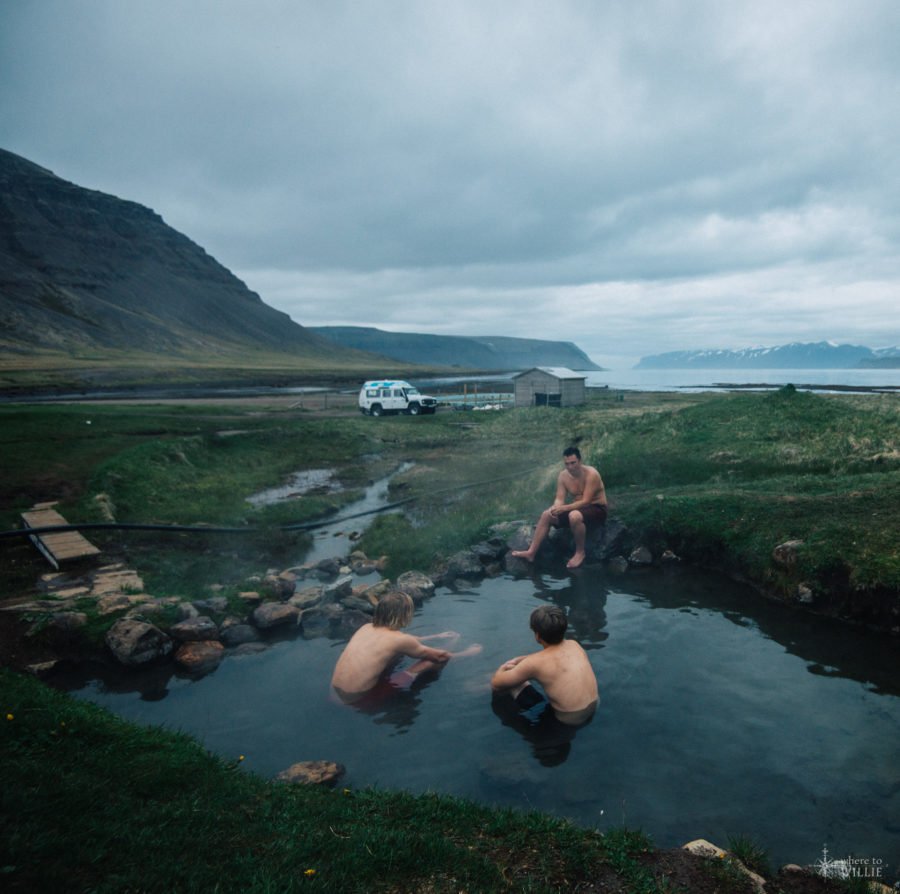 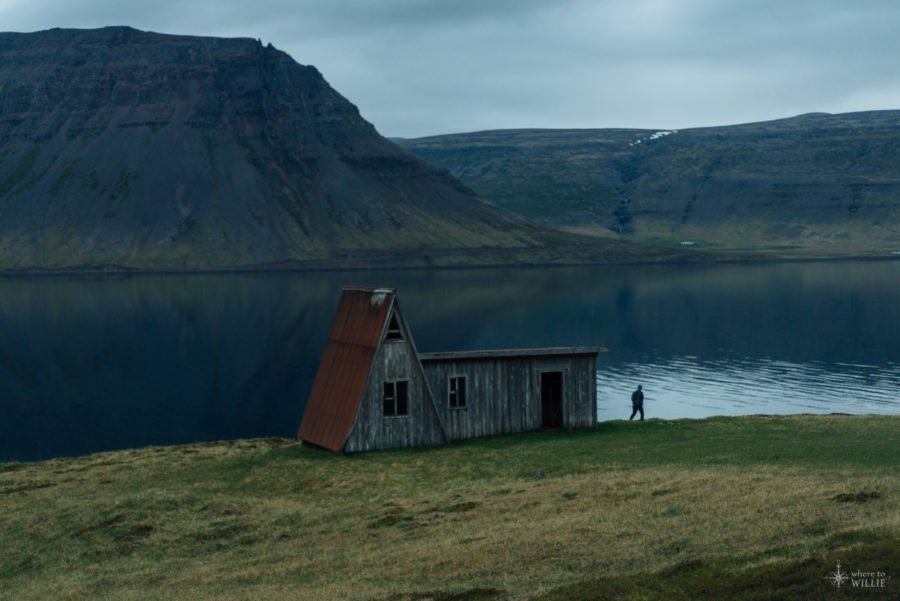 Onwards down the road, and as you can see there is rugged beauty nearly everywhere.  Countless stops along the road on our way to Islafjordur. 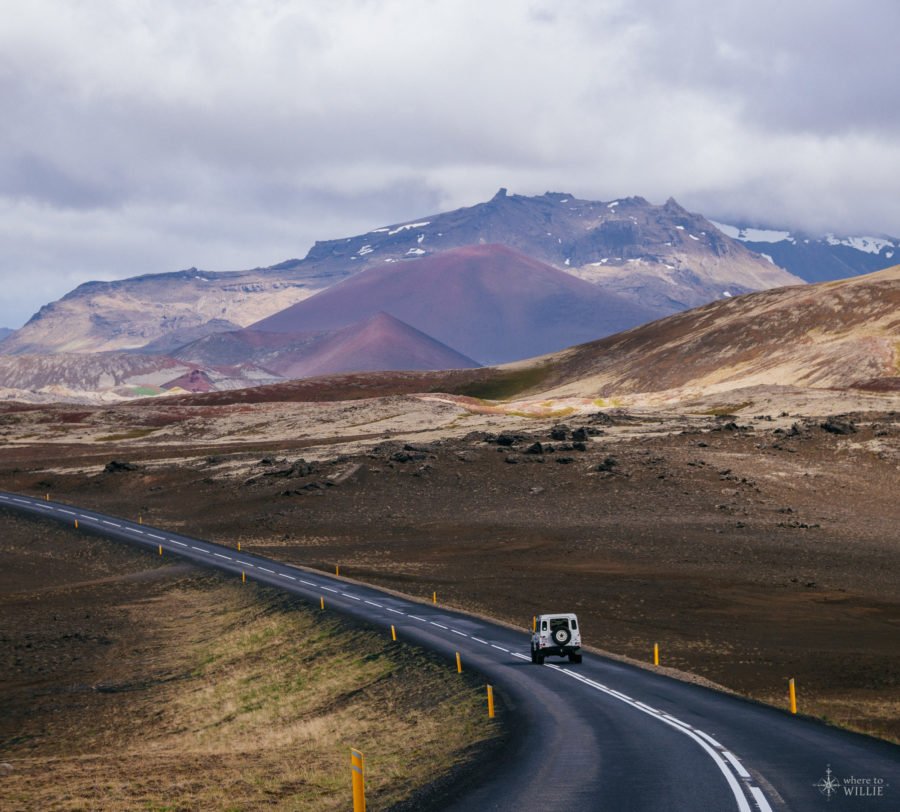 After parting ways with Chris and Ryan, Barky and I continued on, catching back up with the loop road and leaving the west fjords, but not before making another hot springs pit stop. 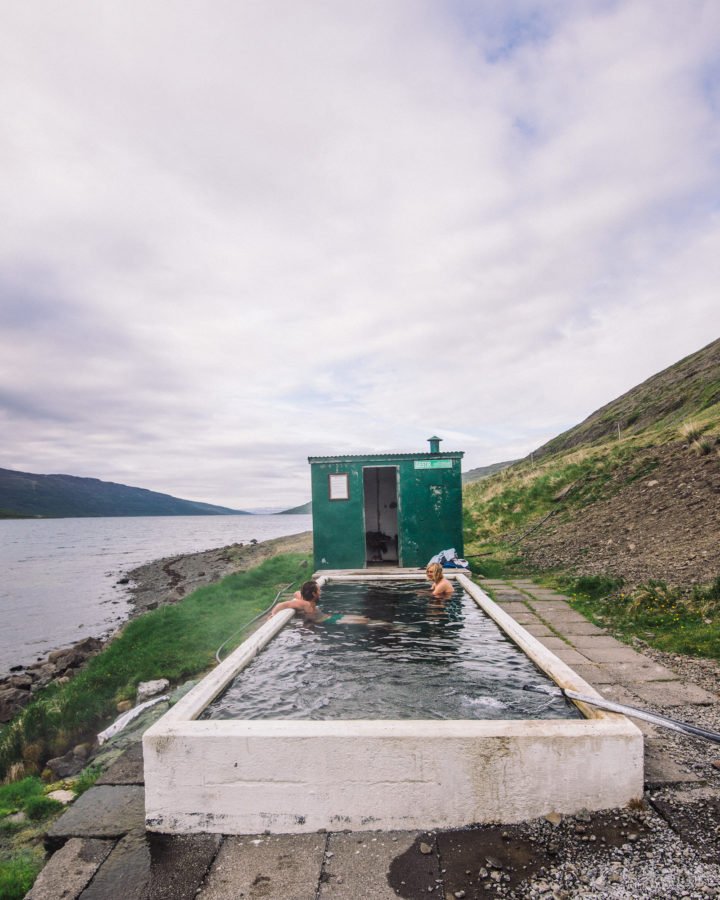 Iceland in the summer is a trippy experience, the sun was setting around midnight and rising at 3am, so we ended up staying up nearly all night then sleeping during the day to be able to photograph in the best light.  Here on some lone road along the north shore, we found a perfect little hill for a casual ride. 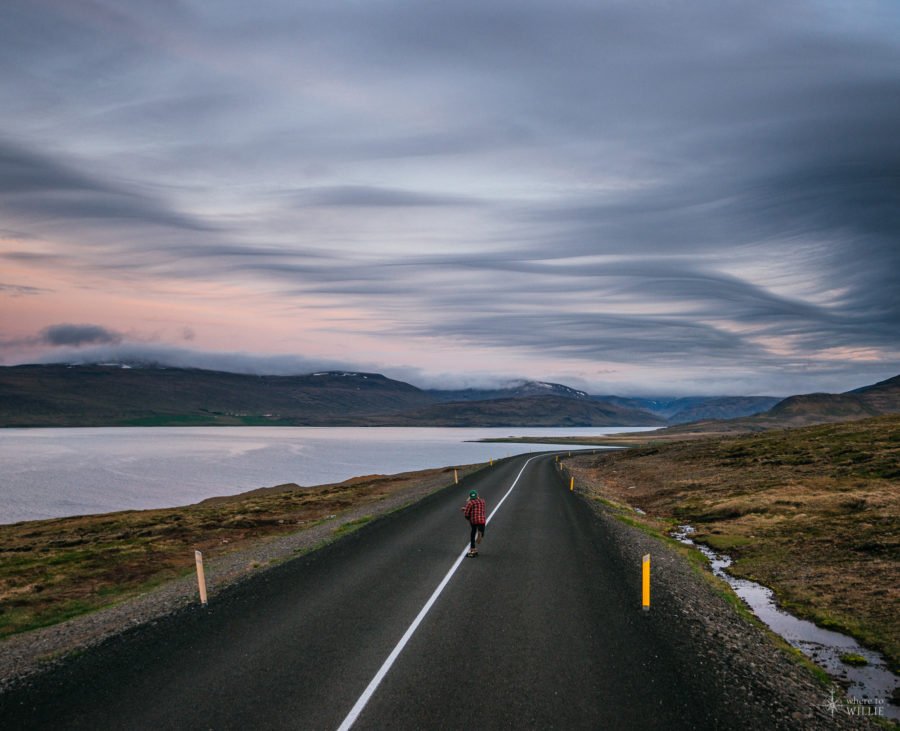 Then, only a few hours later, this happened, and continued happening for approximately the next 45 minutes. 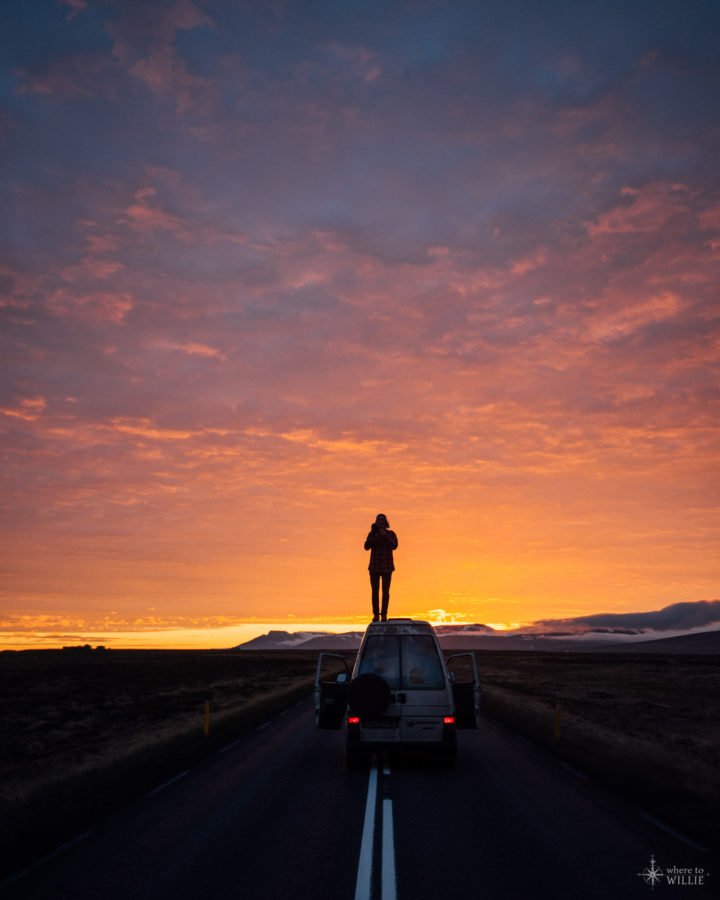 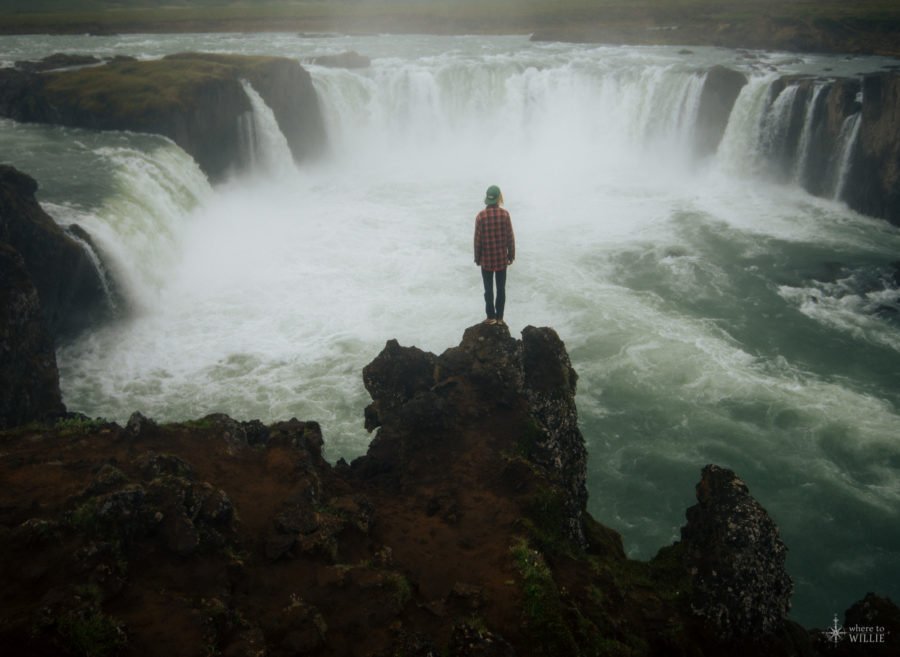 As you make your way across the north, soon you’ll come to the area that is a geothermal hotbed, with cone volcanoes and little houses that look as though they should be on Mars. 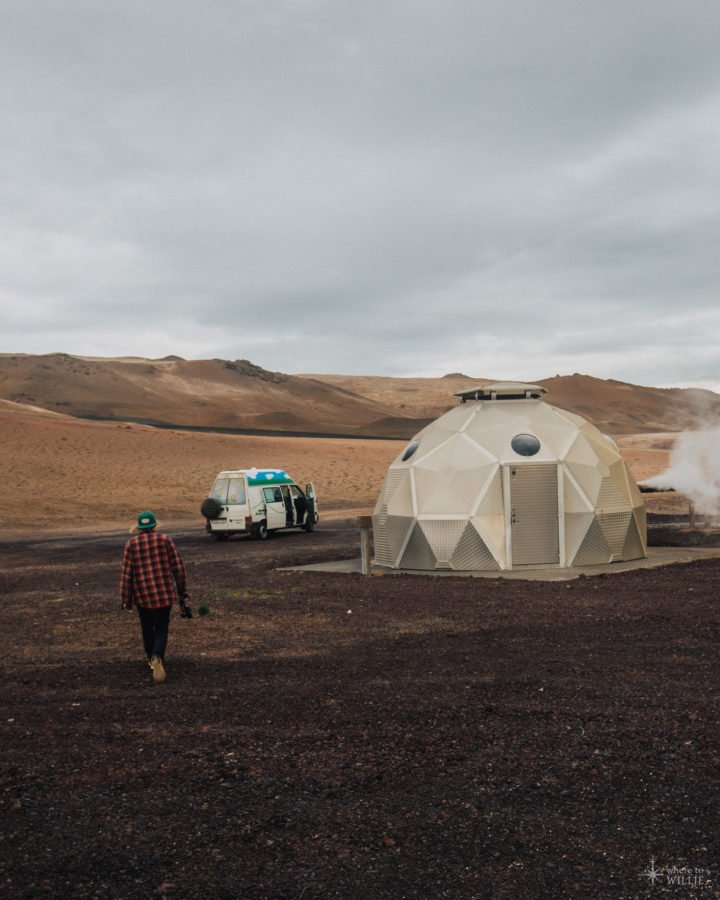 Lots of skating happened.  The roads were too perfect.  We even found the road featured in the film “The Secret Life of Walter Mitty” that Ben Stiller (or his stunt double I’m sure) went down.   Barky decided to ride his skateboard in to the eastern fjords rather than ride in the VW.  With road conditions like this, I understand why (and did a little time on the board myself). 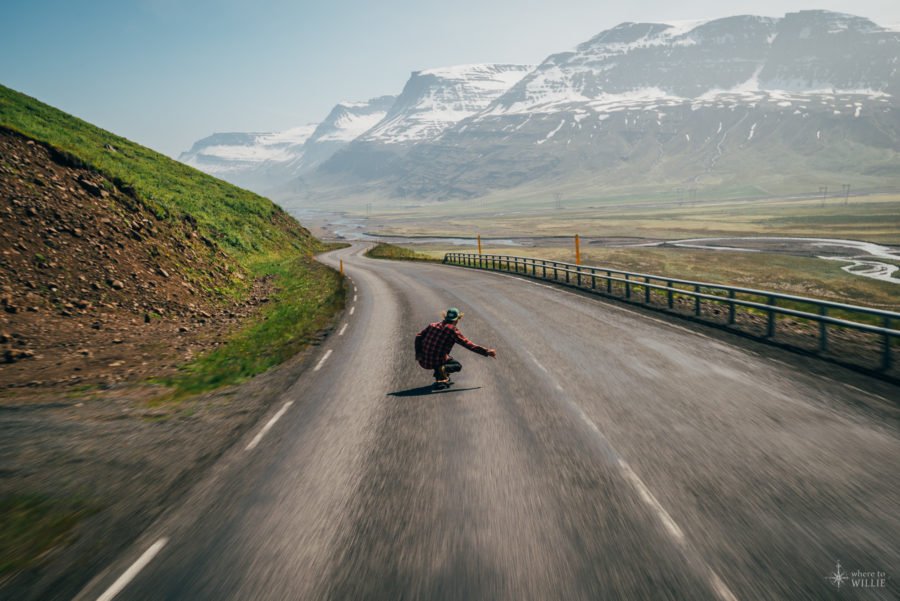 A classic #vanlife view, out the read doors, with the mountains of Stokksnes is the distance. 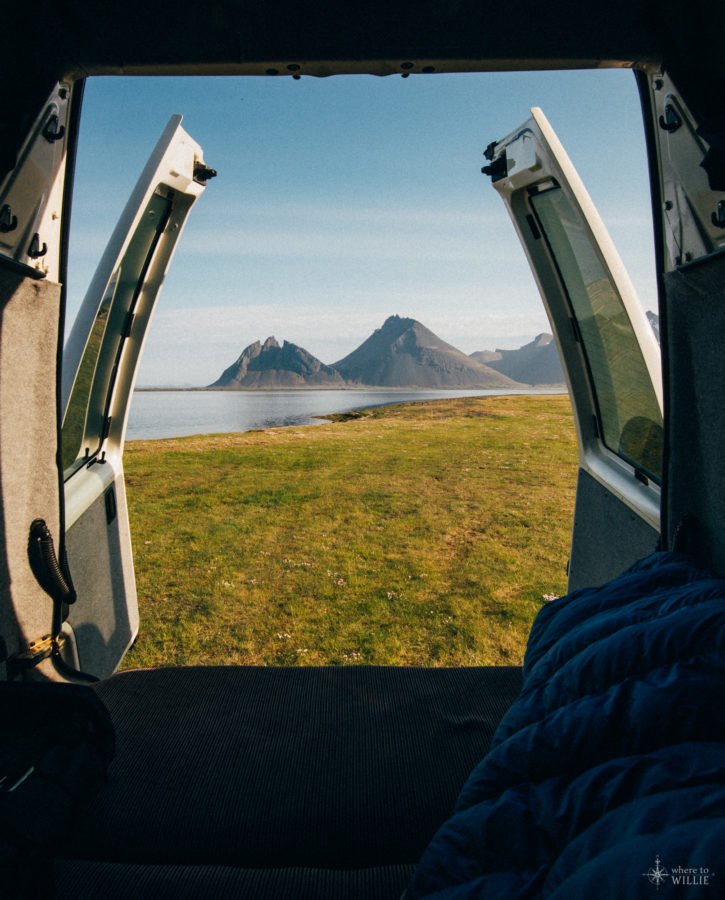 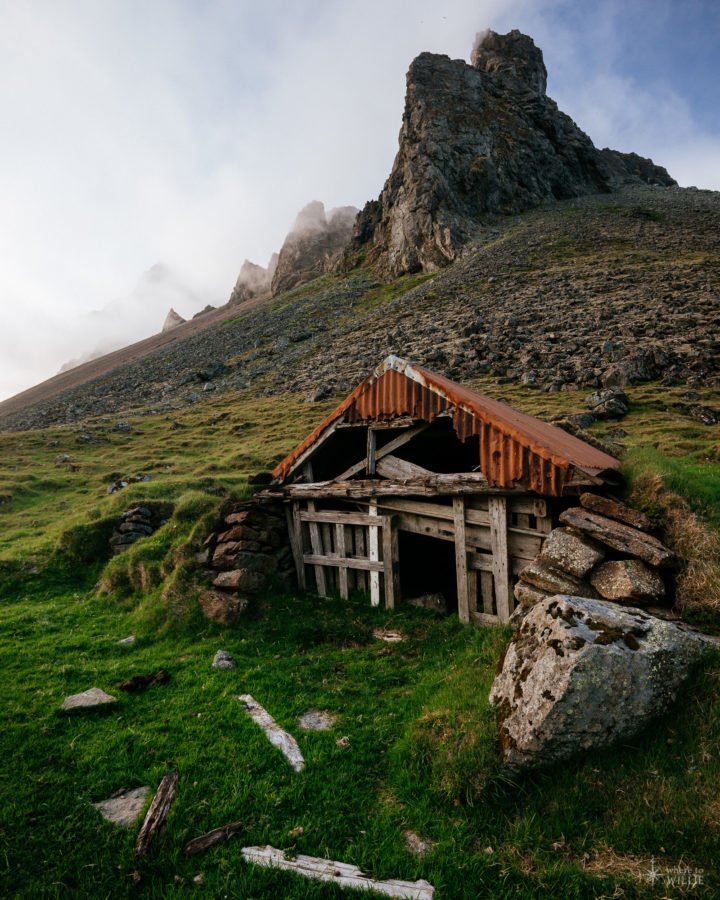 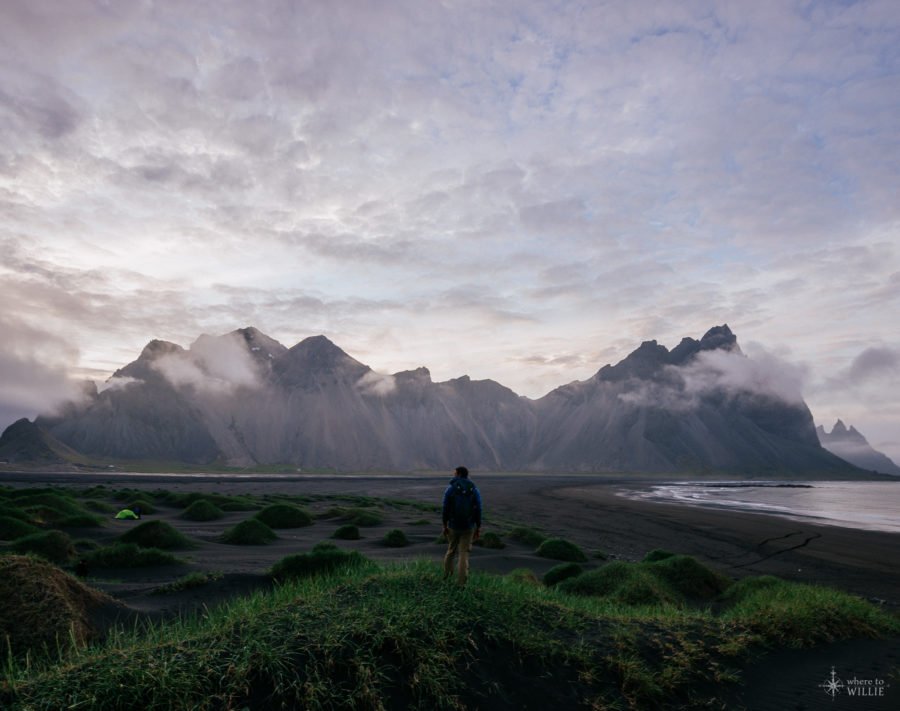 Our trusty steed, holding down the fort at 2am. 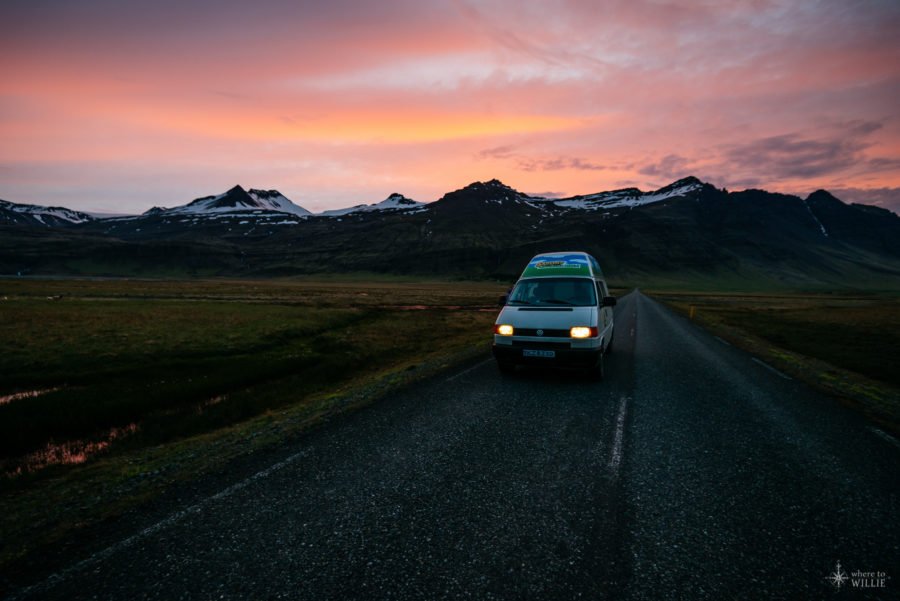 When the clouds socked us in at around 1am, we made the call to move out, hoping to find somewhere that there was no low fog obstructing our views.  We had almost made it to Jökulsárlón (the Ice Lagoon) when the skies began to glow with pinks and orange, as we soon found ourselves on the shores of a perfectly calm lake with only the sounds of cracking ice and our footsteps to be heard. The best part of being awake at 3am, you often get places to yourselves 🙂 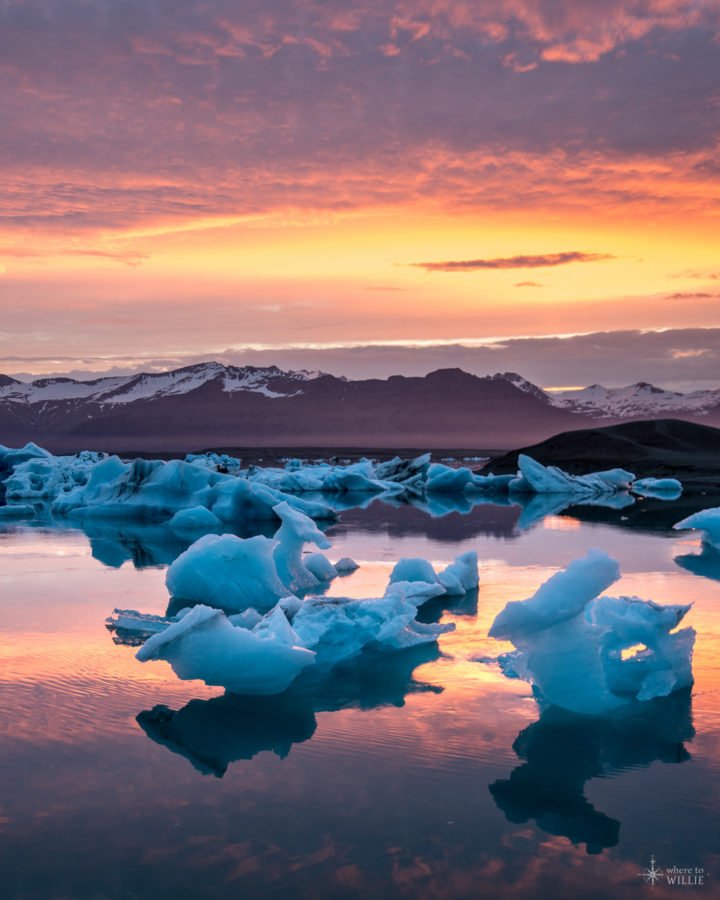 Onwards to Vik, soon we were surrounded by lupines, a beautiful purple flower that has really taken hold in the southern parts of the island. 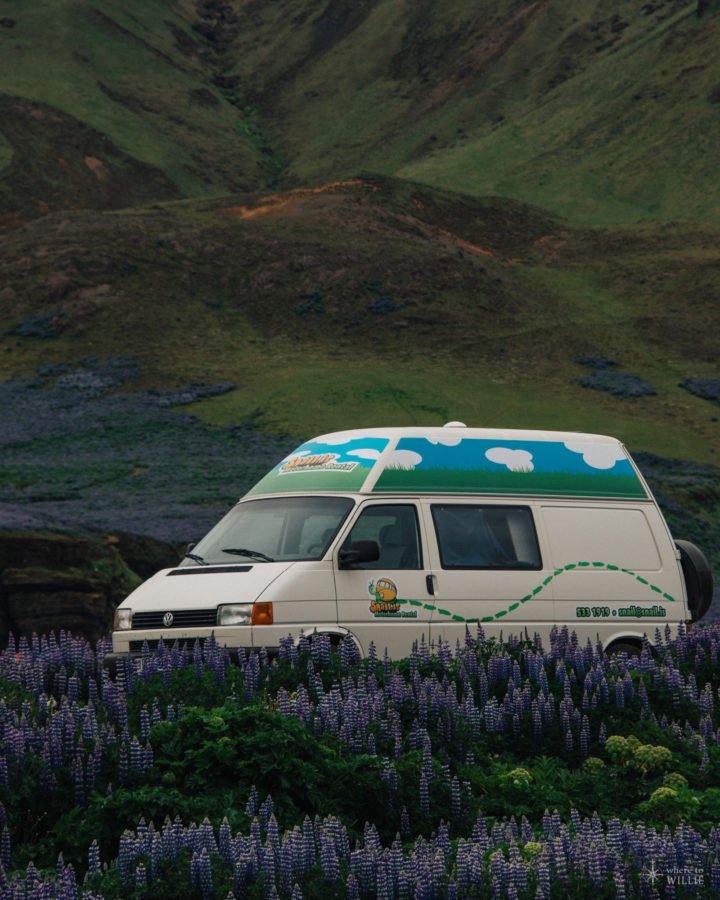 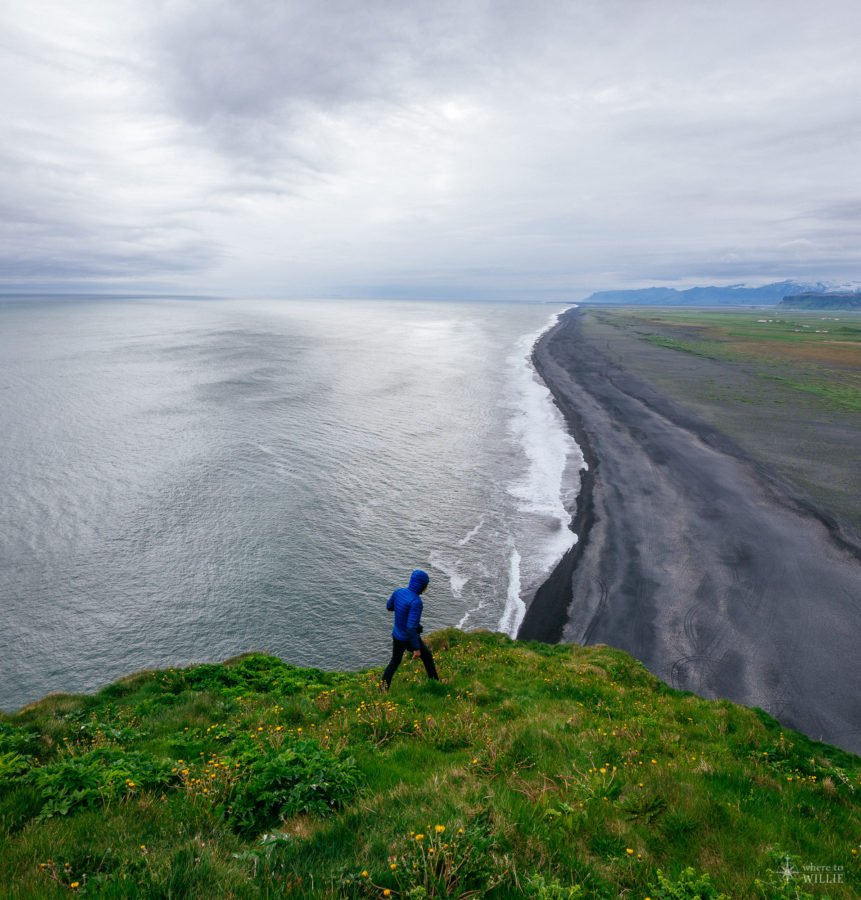 Oh, and the Blue Lagoon.  I don’t think I’ll go back, not really my style; I prefer the lagoons that are a little more off the beaten path.  That being said, it was a casual way to spend our last morning before catching flights back to the states. 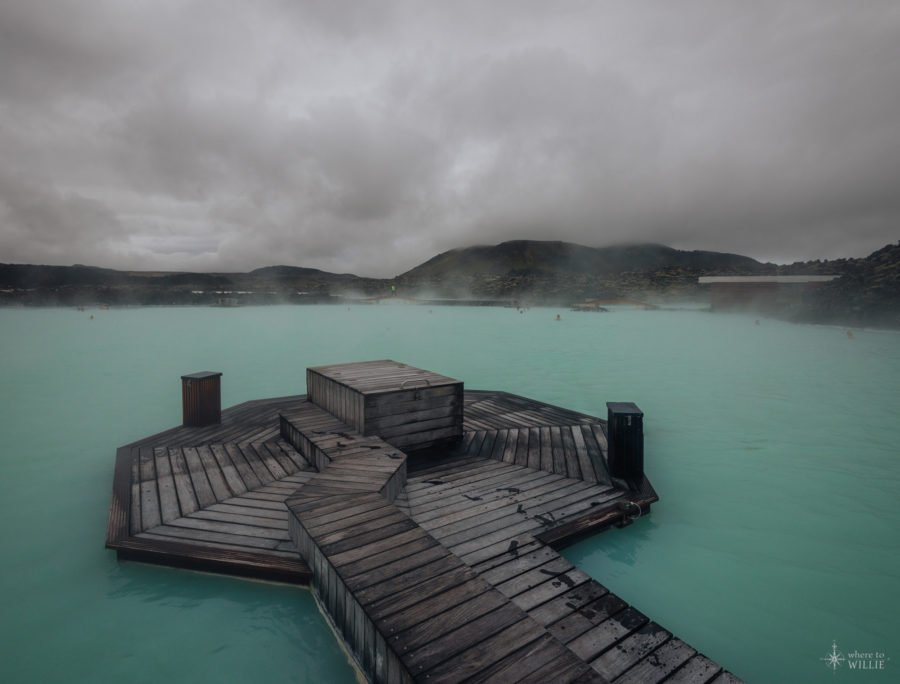 A special thanks to Sigrún and the good folks at Snail VW for helping make this a great trip.  If you’re looking for a solid ride for the island, they offer a great setup, just make sure you know how to drive manual or you might get thrown out 😉