I thought today, in honor of my birthday, I would post a copy of what I posted three years ago on this very same day.

Quarter of a century huh??? Well that seems like quite a lot, but I think that there is quite a bit left to do, so I´m trying to stay out of the habbit of getting in a hurry.  Life is quick, so why rush things?

Today has been quite a day.  Actually the last two days have been go go go.  Yesterday morning I hoped on a our bus, and visited the Sacred Valley of the Incas, the Pisac ruins and Ollantaytambo ruins.  They were both quite amazing, with feats that would be amazing by todays standards of construction.  Then because of all the rain damage, the Ollantaytambo railway has been temporarily shut down, so we took a bus to another station, got the train, and arrived in Aguas Calientes around 9:30 last night.
This morning started with a one hour, 300 meter vertical climb to the gates at Machu Picchu; leaving at 4:30 a.m.  Was it worth it to see the sunrise over the mountains?  Yep.
So I think I´ve figured out the amount of vertical travel today. 1400 meters, or right around 4600 ft. We (Nick and Nicki from London) climbed Waynapicchu, then back down to the ruins, then Nick and I climbed Machu Picchu mountain. Both produced some amazing views of the ruins.  Then of course back down to the bottom, and back into town.  All in all, 4:30 am start, returning to the city around 6:00 pm.  But what an amazing place to be on my birthday.
Sunrise, 5:30am, on my way up to Machu Picchu 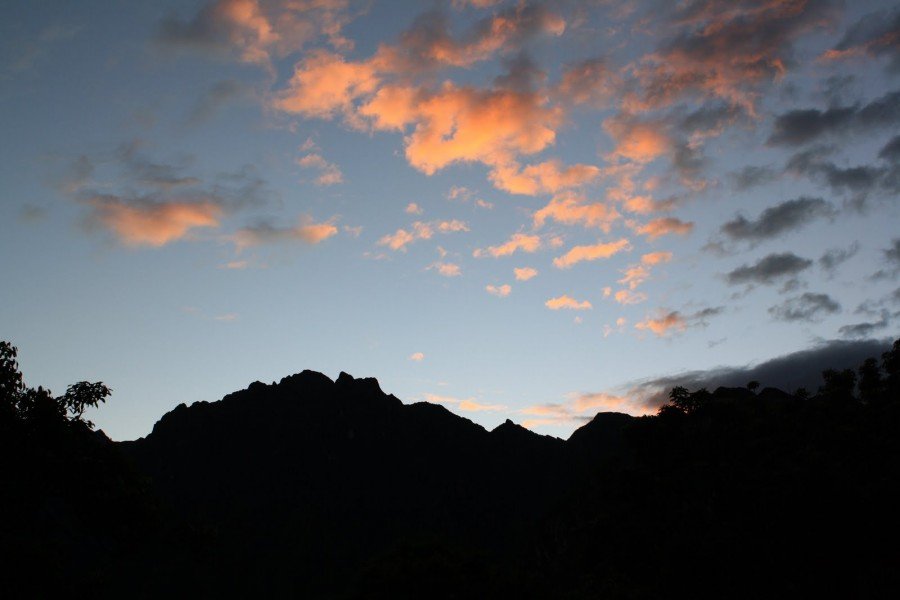 New friends, Nick and Nicki (from London), whom I spent most of the day with.  We´re on our way up Waynapicchu in this picture (300 meters above MP), and some random lady was handing out these awesome paper visors.   Nick is a photographer, also, so Nicki had double the waiting for us to finish shooting.  Only 400 people are allowed to climb Waynapicchu each day, and what amazing views it gave of the ruins. 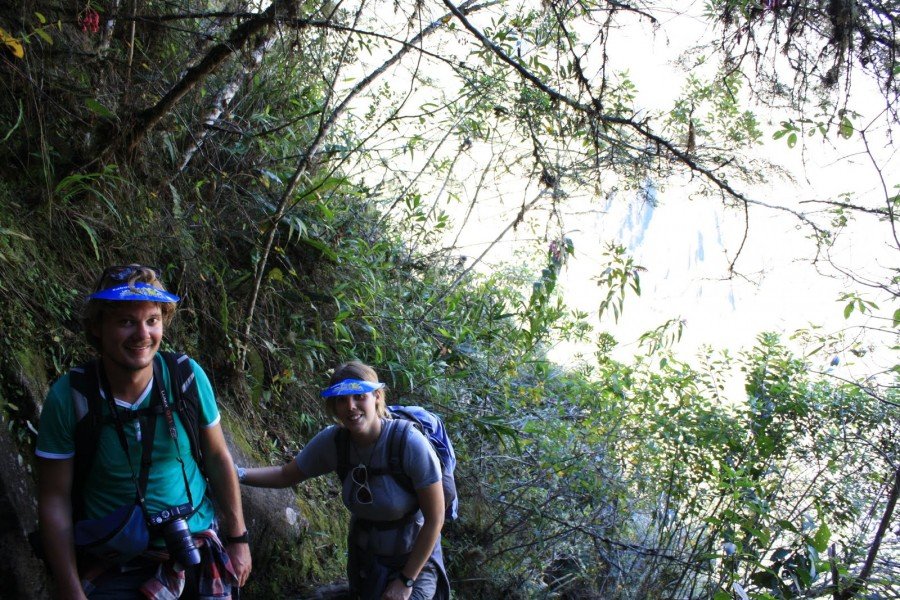 After getting a tip from my tour guide, I had my heart set on climbing Machu Picchu Mountian, the big one that most people don´t climb.  On the day we were there, only about 40 other people that came to MP even attempted this one. The small looking mountain you can see close to the ruins was Waynapicchu, which we had climbed earlier. 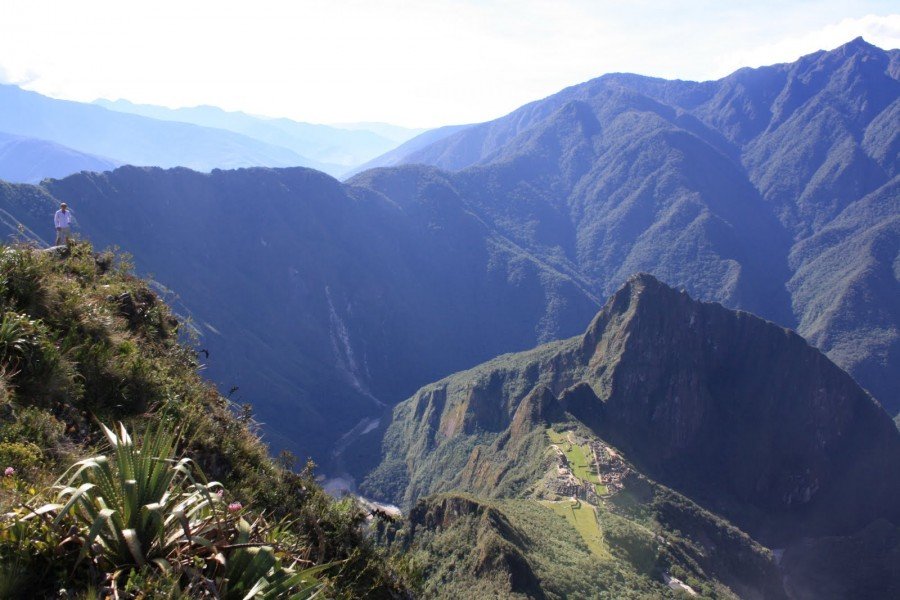 Back down from MP mountain, with the sun setting in the west, it´s been a good day. 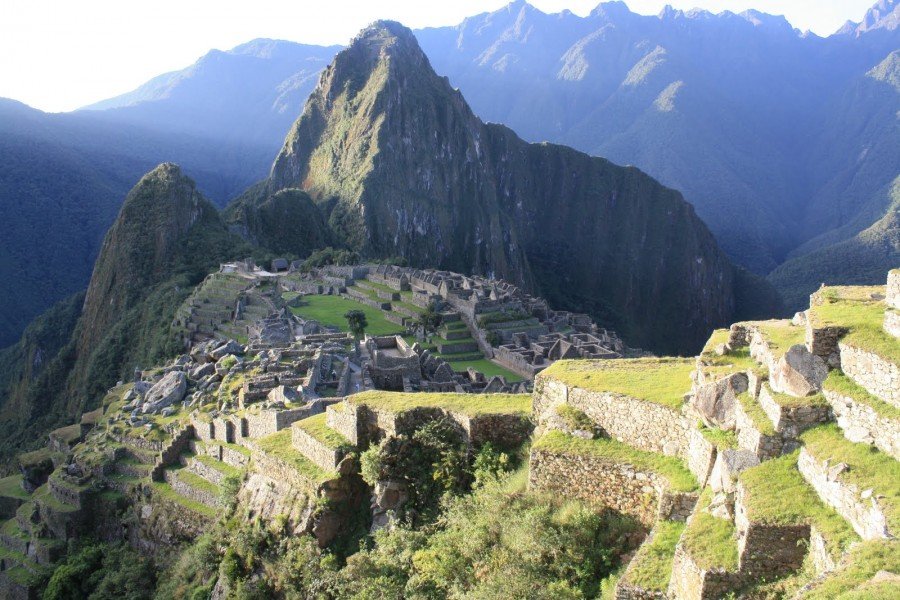 Last picture of the day, as we´re getting asked to leave the ruins because they are closing.  Nick and I needed to show where we had climbed.  Yep, the big one, waaaaay up there, around 500 meters above where we are standing in this photo. 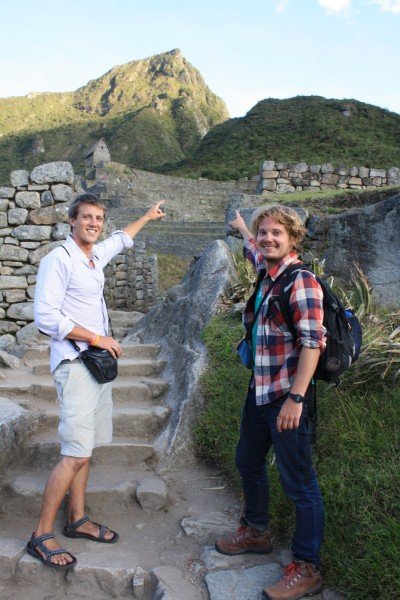 All Around Cusco ~ Cusco, Peru

I’m already working on the next trip-lapse video from New Orleans, then Utah is on the to-do list.

With a few friends running around Cusco this week with The Giving Lens, I was remembering how beautiful of a city it was, and pulled out this gem, a full 360 degree panoramic at the Ovalo de Pachacuteq. You can just see, in the bottom center of the photo, the shadow of the statue that I had climbed for this scenic view.

Another fun thing to think about, the sun in the upper right of the photo is casting that shadow 😉  I’ll be uploading the full size image to Smugmug just as soon as I get my laptop back from the Doctor…

I haven’t done a panoramic shot in quite a while, but there has been some really cool work being put up lately, and it inspired me to get this one finished up.  I actually do shoot quite a few shots for panoramas, but they definitely add a layer of complexity in the post processing.  When done right, though, I will admit that the results are pretty awesome.

It’s been nearly three years since exploring Machu Piccu, but if still feels like yesterday. It’s the kind of place that will stay with you forever, it’s majestic form. I was lucky enough to spend my birthday up here, and you can bet I was one of the first to enter and last to leave. But, I will admit, getting back to Aguas Calientes, and sipping on a Pisco Sour or two with Nick andNikki (who at the time didn’t share a last name) was pretty memorable too, and much needed!

As the Sun Pours Out

I’ve read or heard or something (terrible start to a sentence) that in order to do great things, you have to take great risks.  I’m very certain that is true, and even those who’ve been there before, looking towards the next ‘big thing’ can be daunting.

As the Sun Pours Out

There are a few places that really stand out in my memory, and this is definitely one of them.   I think it has to do with being the first time I was in this type of amazing terrain.  I mean I’ve been thru the mountains and all, but there was something about these particular mountains.  It may have been that it was my first ‘real’ time travelling outside the US, and being on my own, and realizing that THIS was really happening.  In any case, the Peruvian culture that was dispersed throughout this beautiful landscape was something to be seen.  We had previously stopped in a little town, where you can buy some trinkets  but I was more interested in the food!  They had Coca tea, (thru some chemical processes, these are the same plants that cocaine is extracted from) which is great for helping your body with the altitude, and a very interesting corn on the cob and cheese combo.  None of that melty fake nacho cheese, a chunk off a wheel, sweet with a little bit of a cheddar bite. 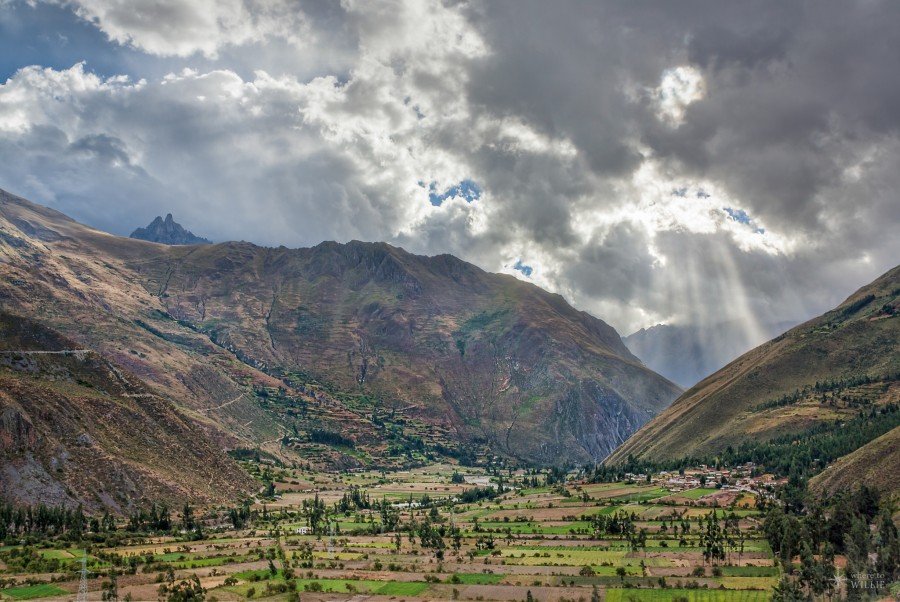 I think everyone likes free stuff.  There is going to be a big contest, and I’m giving something away.  I mean it’s not that big of a surprise, but I’m pretty excited about it.

This is not the prize, this is a shot from a few years back, wandering the streets of Lima, Peru.  I was pretty burnt out after spending so much time at high altitude at Machu Picchu and in Cusco that by the time that I arrived in Lima I had to really persuade myself to go out and explore a bit.  That being said, I’m sure glad I did.  While it’s got it’s standard ‘big city’ things, it does have a good bit of history to it as well.  The architecture and culture are worth getting out and about for alone, and add in a tour or two of some of the interesting buildings and you’ve got yourself a nice afternoon! 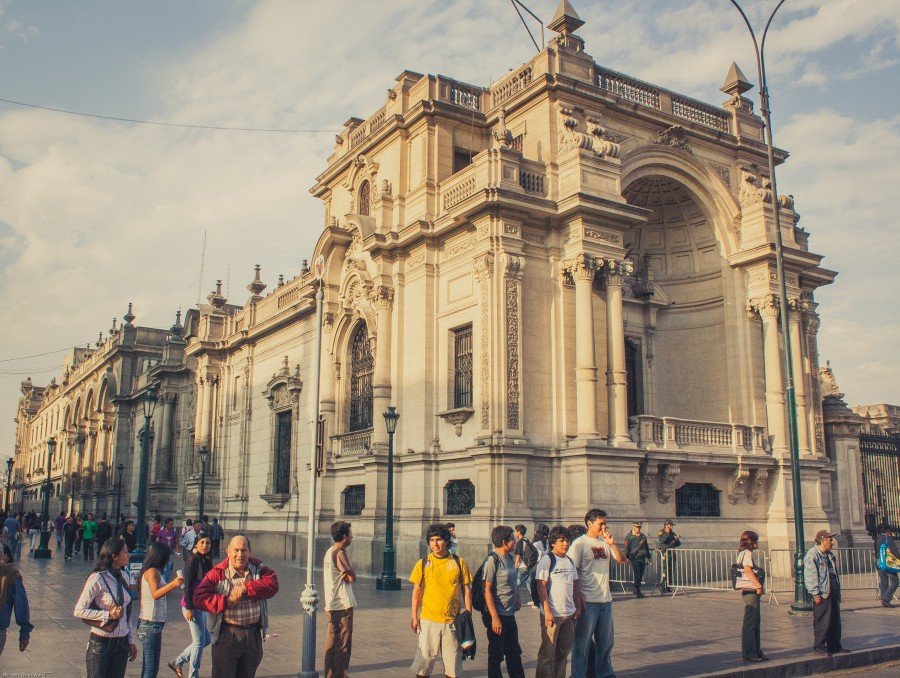 Evenings on the Streets of Cusco

I’ll be at FotoEnvy/Studio Works building at 317 W. Jefferson Street for most of the afternoon/evening.  Here’s a map to the location. http://g.co/maps/ujvvv.  Stop in and say hey!

Evenings on the Streets of Cusco

Some 3000m above sea level, and in the southern hemisphere’s winter, it was a bit brisk in Cusco.  That did make for a nice temperature to wander around and not get warm walking up and down the large hills and narrow streets. Around every corner was a new scene, old lights illuminating the sidewalks, people bustling to and fro.

When you have lots of moving objects in your scene, it’s important to blend a single image back in to the final product to get rid of the ‘ghosting’ effect that you’ll have in your tonemapped image. Layer the two images in Photoshop and using the masking tool, mask thru the hdr down to one of the bracketted photos.  (I usually pick the 0 or +2EV for moving things, but use what is most interesting to you!) 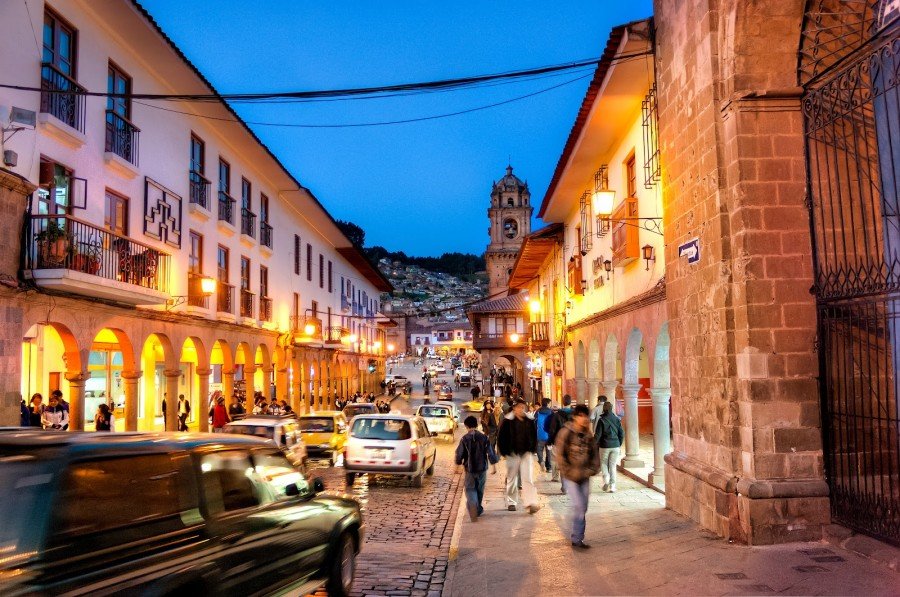